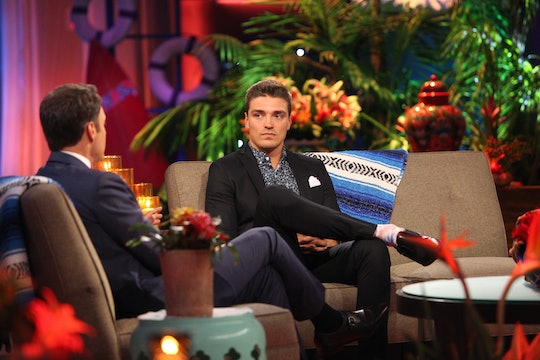 Dean Regrets His Decisions On 'Bachelor In Paradise'

Ugh. I'm going to be honest, I'm ready for this season of Bachelor in Paradise to come to a close. Why? Well, Dean is a large part of it. Initially, he started seeing Kristina; that all changed when Danielle came to Paradise. Then, for what seemed like entire episodes, he began pushing and pulling between the two. Even after he made his decision (Danielle), he tried to backpedal and do a complete 180 during the season finale. This time, though, he couldn't undo this decision. Dean regrets breaking up with Kristina on Bachelor in Paradise, but it's honestly too little too late.

Dean used to be one of my — and Bachelor Nation's as a whole — favorite contestants from Rachel's season. I was actually confused when she let him go (OK, to an extent since that dinosaur question was unnecessary). He seemed to come a long way since telling her he "wanted to go black and never come back"... but once he came to Paradise, it was like fans were introduced to an entirely different person. In the beginning — before the production break, even — Dean and Kristina had a connection. They bonded over their unconventional family lives and seemed to enjoy getting to know each other. When Paradise picked up again, they were still close.

Kristina and Dean remained close until Danielle came on the scene. From then on, there was a love triangle between the three. Kristina was so hurt that Dean would spend time with both of them that she said she felt worse in Paradise than in the orphanage in Russia. After weeks of flip-flopping (which seemed like years), Dean chose Danielle over Kristina. At a rose ceremony, Dean agreed to only accept a rose from Danielle. When Kristina went up to give her rose, she instead said she was quitting Paradise and going home.

Well... turns out Dean flip-flopped again. On the season finale, Dean said he couldn't go through with his relationship with Danielle past Paradise because, drum roll, he is still in love with Kristina and had made a mistake letting her go. Dean started crying in a confessional, saying that he missed Kristina and regrets breaking up with her. Well, as JoJo taught us, it's too little, too late. The evidence is that neither Kristina nor Danielle are happy with Dean now, as evidenced by their post-Paradise interviews. Will Dean even be able to redeem himself to them and to his fans? I hope so, but we may be past the point of no return.