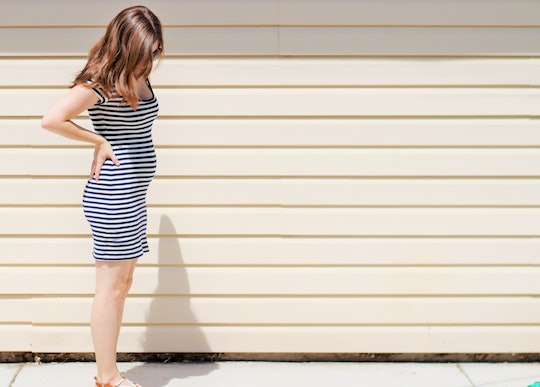 Dear Angel Baby: I Will Never, Ever Forget You

It’s almost the anniversary of the day I found out you were gone. You never had a birthday, but I remember what day that would have been, too. When that day rolls around every year, I always think, Oh, this would have been a beautiful day for a party, or, This would've been a good rainy day to snuggle down and eat birthday breakfast. I remember thinking how odd it was, the first time that due date passed. At that point, I was pregnant again, and I found it surreal that someone else was inhabiting my womb on the day you were meant to be born. It was overcast, calm. It would have been a nice day to be born, I thought.

It’s been nearly three years since I lost you. But I'm writing you this letter to let you know that I still think about you all the time. Or the would-be you, because there is no “you,” is there? There wasn’t much to you when you stopped growing at 9 weeks, or at 12 weeks, when a callous doctor scraped you from my uterus. You were a clump of cells, a beating heart, more an idea than a tangible being. I lost you that day, yes, but more importantly, I lost the idea of you, the life that would have been with you, the mother I would have been to you.

This is a letter to say that I will always think about you, no matter how lonely it feels, because your memory is important and unable to be erased, even if I tried. But I would never try.

Yet I also mourned the loss of the real you. I know you were real because I saw you on an ultrasound screen when you were the size of a Polly Pocket, swinging your arm and leg stumps spasmodically. I saw the blood and tissue dug out from my body during the D&C, somewhere among it, your small heart. There are your cells, carried over the threshold of placenta so some piece of you would remain in my body until the day I die, so not all of you was taken from me. Fetomaternal microchimerism, or the transfer of cells from baby to mom and vice versa, the one small comfort allowed to the mothers of the unborn.

There is the spirit you, too, the one that visits me in dreams. In these dreams, sometimes I am heavily pregnant, waiting to finally give birth to you. Other times, I know that you are with me before I can even take a pregnancy test. There are the phantom kicks that happen sometimes when I think of you. In fact, I've felt them three times while I’ve been writing you this letter.

I’ll remember you when no one else does. I’ll carry you in my dreams. You are mine, mine, mine.

This letter is to say that you are not forgotten. That I am wondering about you all the time, trying to make sense of where you begin and end. This letter is meant to tell you that all versions of you live on inside me. That no amount of time will ever make me forget that for a brief moment, you existed in this world. Now you live on in other ways: in the weather on the day of your would-be birthday, or the tears that come on from out of nowhere, or the loneliness I feel when I am thinking about you and I know that no one else is or ever will be.

This is a letter to say that I will always think about you, no matter how lonely it feels, because your memory is important and unable to be erased, even if I tried. But I would never try. Because no matter where I land on how much of you is phantom and how much of you was real, the fact remains that you belong to me and only me. You were never held by anyone else, never known in any intimate way, imagined or real, by anyone but me. It’s a letter to say you’re still my baby, that you always have been and you always will be. I’ll remember you when no one else does. I’ll carry you in my dreams. You are mine, mine, mine.