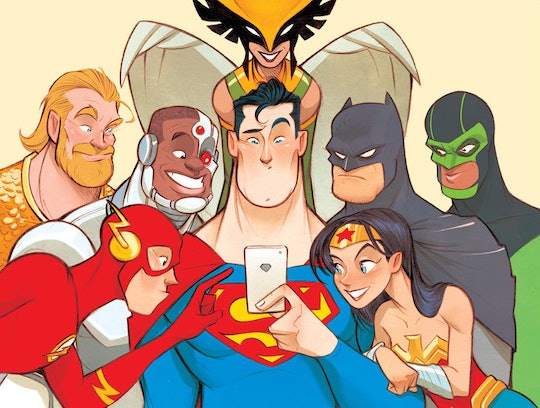 For a lot of so-called "reluctant readers" (a term I don't love because often I think we just haven't given them something they will enjoy), comics and graphic novels are a way into reading. Michael Northrop, the author of the forthcoming Dear Justice League, with art by Gustavo Duarte, understands these readers, because he used to be one of them. Northrop spoke with Romper by phone about the hurdles he faced as a kid with dyslexia who would, nevertheless, grow up to be author, and gave us a first look at the Wonder Woman chapter in his new book.

More than finding reading boring or difficult, Northrop had a lot of hurdles that stood in the way of him loving to read. "I'm dyslexic, and so reading was a struggle for me early on. I repeated second grade," he recalls, "and I really avoided reading on my own for a while."

On his second turn through second grade, he sat in a corner re-reading the same few picture books. "I really avoided reading on my own for a while."

But you know what got Northrop into reading? You guessed it: comics.

Comics were the first thing he read for fun, and more than that, he was able to read them at the same rate and with the same understanding as his peers. "I definitely remember, just those like back-of-the-bus moments where you're sitting back there and talking about the story; what you think is going to happen next. And that was really a first for me because I hadn't been able to participate in those conversations before," he tells Romper.

Comics and superheroes were the gateway into a whole world of fantasy reading. He found a new love in poring over Dungeons and Dragons handbooks. Then it was fantasy novels. Before too long, Northrop was in college as an English major, on his way to becoming a children's book author.

Northrop kept those kids in mind as he structured Dear Justice League, an anthology of superhero stories. There are easily-digestible, short chapters. It's going to be satisfying for a young reader to pick it up, check out the hilarious Superman story, and put it down to read more later. The Superman story has another thing going for it: it's mostly pure visual storytelling. It's all physical humor and expressive facial expressions, with some sparse text.

Northrop gives a lot of credit to Gustavo Duarto, the artist. "He's just a genius. And what he does really well is this physical comedy. You know, some bumped heads and wobbly knees, and that kind of stuff, which is just funny."

Duarte and Northrop, together, gave this cast of larger-than-life superheroes a lot of regular human stuff to deal with. It's another way kids are invited into this story. For example: even a young Wonder Woman couldn't help herself from taking waaaaaaaaaay too much cake at her birthday party. And real-life problems like: looking down at your phone when you should be looking where you're going, worrying about how you smell, and over-indulging in cake.

"What I wanted to do was, not to lessen them at all, but to make them relatable," Northrop explains of his characters. "They have very gentle flaws. Like they might be a little insecure, or vain, or overconfident. And those are things that kids will recognize in themselves, or their friends."

What kid can't relate to eating too much cake at a birthday party? And those kids will therefore be happy to know that even Wonder Woman can be laid low by too much sugar. Romper has an exclusive first look at the Wonder Woman chapter. Check it out and enjoy the visual storytelling and super expressive characters.

The format of superheroes answering mail or email or texts from kids is yet another way Northrop invites the young readers in.

"In letters, and texts, and emails, I wanted to show people communicating openly, and honestly, and in a positive way. Asking earnest questions and getting honest answers, which is sort of the ideal, right?"

The superhero that Northrop was most interested in when he was a kid also appears in Dear Justice League. "I think, yeah, as a kid, the first character I would have written to, would have been Green Lantern. And just probably to ask him, what that was like? To see something in your head, and then see it in the world."

It's very fitting, because now as an author of a graphic novel, that's exactly what Northrop gets to do. "It's exciting to be able to write their stories. And I just wanted to do it in a way that it expressed my feelings, and my appreciation, for those characters, who meant a lot to me."