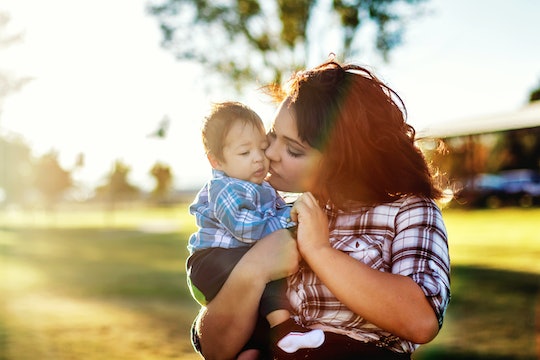 Dear Mom Worried About Abortion Access: I See You

"Are you watching this?" a friend texts me, as news of the latest abortion ban floods my social media feed. "Yes," I respond. "I am watching." There is nothing more for us to say, and I know that, at about this time, she has to leave work and pick up her toddler from daycare. The constant hustle required of any parent cannot stave off the anxiety produced by our current political climate, and now that an unprecedented number of anti-abortion bills are being introduced, passed, and signed into law, our anxiety has hit a fever-pitch. Produced in texts. Sent from one coast to another. A palpable reminder that the people who claim to champion motherhood are attacking the very foundation of it.

We're parents. We've had abortions. And, like you, mom, we are afraid.

Ohio, Kentucky, Mississippi, Georgia, and Missouri have all passed so-called "fetal heartbeat bills," banning abortion at six weeks gestation and before most people know they're pregnant. Alabama has passed a full abortion ban, without exception for rape and incest. So far, in 2019, 41 states have introduced more than 250 anti-abortion bills; a trend that's only excepted to rise.

These anti-abortion bills, introduced and signed into law with the sole goal of challenging Roe v Wade, are passing swiftly and with shameless impunity. And as you look around, you're watching everyone from the president of the United States, to political talking heads, to your friends and family, celebrating. Even though the majority of Americans support unfettered access to abortion and do not want to see Roe v Wade overturned, you know there are people around you — people you love and who love you — who are happy to see your constitutional right to abortion eradicated.

And this pains you, because while you're often over-looked, mom, you know that these bills impact you and your families the most.

The majority of people who have abortions have at least one child at home. It is mothers who are going into clinics that provide abortion care and knowingly, willingly, and almost always without regret, terminating their unwanted pregnancies.

It is also moms who are making the difficult decision to terminate a very wanted but non-viable pregnancy later in gestation. While the president and GOP pundits have worked tirelessly to demonize those who have second- or third-trimester abortions, you, mom, could very well be a mother who relied on that care to make the best, albeit heartbreaking decision for herself, her family, her body, and the life she had hoped to bring into the world... if only it had been medically feasible.

Maybe you tried to access abortion care earlier in your pregnancy, but because of anti-abortion laws that create unnecessary barriers to care, couldn't. And now you're watching your elected officials vilify you on the evening news.

Or perhaps you're a mom who tried to terminate her pregnancy earlier, but because you live in a state hostile to abortion rights, couldn't find adequate child care, or a place to stay while you sat through a mandatory waiting period, or had to secure travel so you could reach one of the very few clinics that provide abortions in your state. Maybe you live in Kentucky, Mississippi, Missouri, North Dakota, South Dakota, or West Virginia: the states that each only have one health care clinic that provides abortions left.

Of course, abortion restrictions actually increase the number of abortions performed later in pregnancy, as a 2019 study from the Texas Policy Evaluation Project found. Maybe you tried to access abortion care earlier in your pregnancy, but because of anti-abortion laws that create unnecessary barriers to care, couldn't. And now you're watching your elected officials vilify you on the evening news.

Maybe you're a black mom, or a mother of color, or a poor mom: all mothers who are disproportionately impacted by anti-abortion legislations. Mothers who face higher rates of maternal mortality than white women.

Maybe you're envisioning an unforeseeable but entirely possible situation in which you became unexpectedly pregnant — a situation that would make it next to impossible to take care of the children you currently have. The inability to take care of dependents, and the inability to financially support a child, are two main reasons why people seek abortion care. Reasons you can imagine and empathize with all too easily.

Maybe, after watching the news, you look at your children and fear a scenario in which you aren't physically able to do whatever it takes to provide for them; to be the mother they deserve; to give them every opportunity imaginable. A scenario that feels more and more probable. When women are denied access to abortion care, their children suffer, and you cannot fathom your children suffering because of the decisions made by rich, white men who will never know what it's like to get pregnant, carry that pregnancy to term, and birth a child.

Maybe you're like me: a mom who has had an abortion. A mom who can credit safe, legal, affordable access to abortion as the reason why she's able to provide for her children.

Maybe you're a mom with a health condition, or a history of notoriously high-risk pregnancies, and you're afraid of what could happen if you were forced to carry a pregnancy to term. Studies have shown that states with the highest number of restrictions also have the highest number of maternal and infant mortality rates.

Maybe you're like me: a mom who has had an abortion. A mom who can credit safe, legal, affordable access to abortion as the reason why she's able to provide for her children. A mom who knows that, without abortion, she wouldn't be a mother at all. A mom who doesn't want to see the sanctity of motherhood — sanctity that is rooted in the ability to choose whether or not to be a parent, and when, and under what circumstances, and how — desecrated by a slew of laws that do not champion life, but champion forced-birth.

I don't know you, mom, but please know that I am fighting for you. We are fighting for you. Because while the voices of the dwindling anti-abortion movement might be loud right now, the constitutional right to access abortion care isn't debatable. The majority of Americans want to see abortion access protected. After the abortion ban in Alabama passed, abortion rights organizations like The National Network of Abortion Funds, P.O.W.E.R. House, and the Yellowhammer Fund all saw a surge of donations. Regardless of the anti-abortion bills signed into law, abortion is still 100 percent legal in all 50 states. You can still access the abortion care you need, and there are people, places, and local and national organizations that will help you find a clinic that provides abortion near you.

We are with you, standing beside you and fighting for you. We're joining NARAL to #StopTheBans and we're donating to local and national abortion funds to help pay for abortion care and we're sharing our abortion stories using #ShoutYourAbortion and #YouKnowMe and we're refusing to allow these attacks, and this fear, to permeate into and hollow out our democracy.

Because we know that without abortion, motherhood as we know it wouldn't exist.