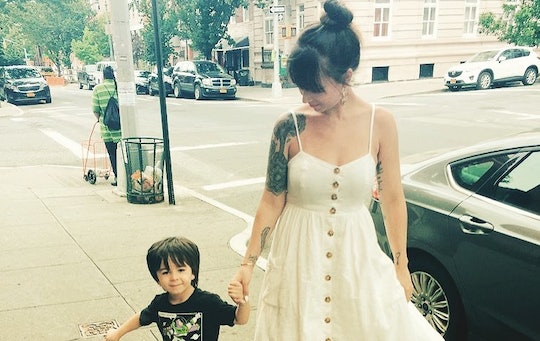 Dear Mothers Of The Accused: This Is Not The Way

My 3-year-old son is sitting on our living room floor, his Iron Man action figure in one hand, and Captain America in another. He's narrating their latest adventure and his lip begins to quiver as he explains that his plastic best friends are fighting. Then he is crying, and I sweep my sensitive, kind, too-pure-for-this-world son into my arms and tell him that it's OK; sometimes friends fight; sometimes they disagree; it works out.

In this moment, I can't imagine this little boy whose heart breaks over his toys hurting another human being. I can't picture him throwing his fist at another person's face, pinning a woman down, ignoring her as she utters "no," or disregarding her humanity for power or sex or no reason other than that he can. As his mother, I cannot see it. I don't want to. It's painful to even try. In this moment, I feel something protective in me closing in around him, the same instinct fueling the mothers recently featured in The New York Times for vociferously defending sons accused of campus sexual assault; four parents "willing to do everything" for their children because "boys will be boys," "mistakes happen," and "think of the children." We must always think of the children. Must protect our children.

I understand the impulse to close ranks around our kids. But as a sexual assault survivor, I know that every person is capable of the unimaginable. I know we all exist on a spectrum of humanity and everyone essentially chooses how they'll act and who they'll be, moment by moment. I know that assuming my son will automatically choose respect and equality and kindness — then failing to do the work and teach the lessons and set the examples because, hey, he cries when his action figures are fighting — will make it far easier for him to become the next Brock Turner or Harvey Weinstein.

I've felt my son kick me from the inside. I know what his heart sounds like, sandwiched somewhere between my belly button and the base of my aching spine. His very existence has changed the chemicals in my brain and expanded my definition of love and altered the amount of fear I can carry inside me before deciding I can't get out of bed. I have looked him in the eyes, barely breathing under the weight of so much unconditional love, and promised him with all that I am that I will protect him.

But while my love is unconditional, my support is not.

I cannot be like Brock Turner's mom, who pleaded with Santa Clara Country Superior Court Judge Aaron Persky to save her son from prison. "I beg of you, please don't send him to jail/prison," she wrote in a letter later released with other court documents. "Look at him. He won't survive it." She didn't think about the death sentence her son had already, knowingly, willingly, given his victim.

I cannot be like Judith, who told The New York Times, "In my generation, what these girls are going through was never considered assault. It was considered 'I was stupid and I got embarrassed.'" Judith's son was expelled after having sex with a student who was too intoxicated to give consent.

I cannot be like the dozen of mothers who were interviewed by The New York Times and said they "wanted to protect their sons from being publicly revealed as having been disciplined, or even accused, in a sexual assault case."

I refuse to be like Alison, who told the Times, "We don't really need to teach our sons not to rape." Her son was accused of sexually assaulting a female student near their shared university campus.

On average, there are 321,500 victims of rape and sexual assault each year in the United States. What would that number look like if we did, in fact, teach our sons not to rape? How low would that number fall if our sons knew they couldn't call their mothers to say, "I think I have a problem. It's bad," knowing mom would stand beside them?

Only 344 out of every 1,000 sexual assaults are reported to the police. I believe more victims would feel safe coming forward if we stopped humanizing predators as the large, grown sons of mothers; stopped romanticizing motherhood and imploring women to value their children above all. I believe victims could start to believe police would actually help them and that the justice system would actually support them if we held fathers as accountable as mothers — it's mothers who issue the emotional pleas to give their sons a second and third and fourth chance. What if we, as a society, stopped worrying about the sons that assault women and, instead, started worrying about the daughters that are being assaulted?

My son seems too pure for this garbage world; too naturally empathetic to hurt another human. But then I think about the coworker who sexually assaulted me during a work retreat. I remember his hot breath and his callous hands and his refusal to even acknowledge my begging pleading yelling screaming please stop don't.

I bet he played with action figures, once.

I bet his mother swept him up into her arms when he started crying.

I bet she looked in his eyes, barely breathing under the weight of so much unconditional love, and promised him that she would protect him. No matter what.

I wonder what would have happened to me if she didn't.