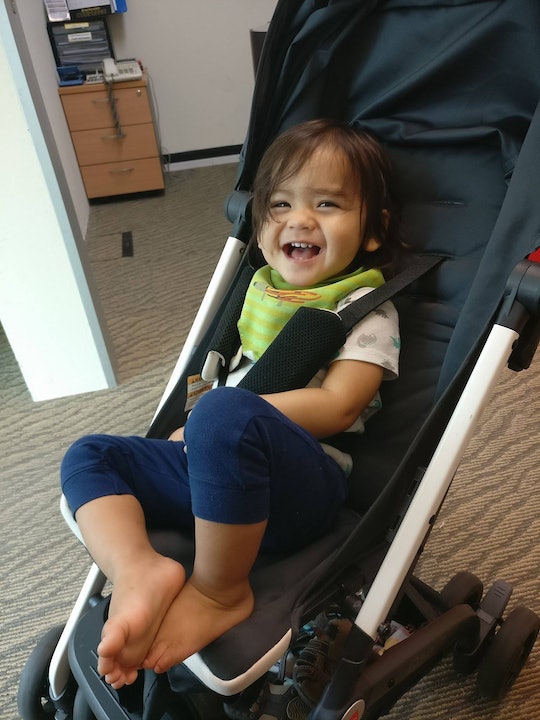 Dear People Who Insist I Cut My Son’s Hair

The next time you see me and my handsome baby, whether it's in person while running errands at the grocery, or virtually on Facebook video chat or Instagram stories, please do me this one favor: stop telling me to cut my son’s hair.

First of all, I – his mother and legal guardian – don’t want to. I happen to like the way his hair looks now. It's a combination of straight and curly, similar to mine, and I enjoy the fact that my baby looks like me. His father doesn’t particularly want to cut his hair, either, and for now, while our son is still a baby, those are the only opinions that really count. He's our child, so until he's old enough to figure out what hairstyle he wants, we get to decide what to do with his hair. And our decision is that we're going to wait until we cut his hair.

Why do you keep insisting that we cut his hair, anyway? What’s the rush? There’s no rulebook that states all babies must have a haircut by the time they reach a certain age. And contrary to what a lot of people insist when they comment on my son’s hair, it doesn't bother him. He’s perfectly happy playing with his hair in his eyes. In fact, the only person it really bothers is you.

When you make the assumption that my son is a “cute little girl” based solely on his hairstyle, don't get super uncomfortable when I correct you. And please don't try to salvage the conversation by saying I should really just cut my baby’s hair so people aren’t confused by my son’s gender. That's not helping, so just move along and take your opinions with you. (For the record, so what if they think he's a girl? Girls are awesome.)

And please, those of you who still think that boys shouldn’t have long hair because it will make them “grow up gay": keep your opinions to yourself. There are so many things wrong about this statement, and it makes me so angry that I have to explain it in this day and age. Having long hair won’t "make" my son gay (even though he is free to be gay if he wants to). What kind of nonsense is that? Ever hear of Fabio? He’s a famous Italian heartthrob adorning myriads of romance novel covers who sports flowing locks. Also, he's not gay.

My 16-month-old son has beautiful hair. It's brown like his dad's, but curly like mine. His locks frame his chubby face, which is always smiling. His bangs are like curtains that draw attention to his big, wide eyes, and he loves shaking his head to make them wave back and forth. His mane is long enough to cover the entire nape of his neck when it's wet, but it's short and curly when it isn't. His baby man buns are hilarious and his ponytails are adorable. His hair is one of the things that make him the charming little baby that he is, which is why it bothers the heck out of me whenever people tell me to cut it.

I’s not like I haven’t thought about nipping a few inches off. But my son is at an age when sitting still is a totally unappealing activity. Even the act of cutting his fingernails is a struggle! Additionally, a baby's first haircut is such An Ordeal. It takes time to find a salon that specializes in baby haircuts. It's also important that my son sees one of his parents get a trim before he gets his own, so he sort of has an idea of what he's getting into and his potential freakout can be minimized. Until he is able to get into that head space (or something close to it), we're going to postpone his first trip to a kid’s barber a bit longer.

OK, maybe a part of the reason why I don't want to cut my baby's hair is because people won’t stop telling me to have his hair snipped. As juvenile as that sounds, I feel like a baby’s first haircut is an important milestone. It's a rite of passage. Wouldn’t it suck if it finally happened because I merely gave in to constant peer pressure?

So be a pal and help me make my baby’s first haircut special. How can you do this? By shutting up about it.