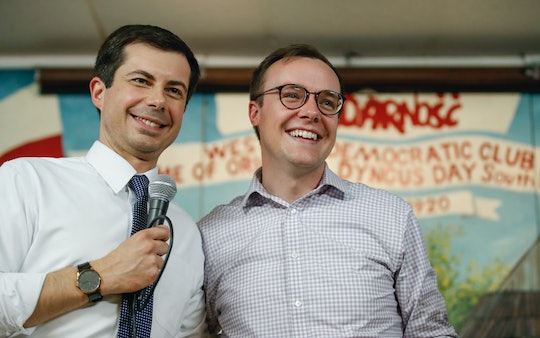 A week after he was awarded the Presidential Medal of Freedom, conservative radio host Rush Limbaugh was back on the airwaves. On Tuesday, Limbaugh wondered how parents would "explain" Pete Buttigieg kissing his husband to their children, implying that the presidential candidate's sexual orientation posed a "problem" for parents.

"So I saw a political ad, where Mayor Pete Buttigieg [was] going on and on and on and on and on about how parents in America are struggling to explain President Trump to their children," Limbaugh pontificated on an episode of The Rush Limbaugh Show. "And then I happen to see this," he continued, holding up a photograph of the presidential hopeful kissing his husband, Chasten Buttigieg.

"So he says Trump causes problems for parents, what about that?" Limbaugh questioned, before noting that Buttigieg kisses his husband "frequently."

If, five years after the Supreme Court legalized same-sex marriage, parents still haven't spoken to their children about sexual orientation and same-sex couples, well, that hardly seems like Buttigieg's fault. In a handy turn of events, there are a number of different resources to help parents talk to their kids about sexual orientation and gender identity out there. What's more, most children simply understand and just know that love is love.

"Millions of people the world over, gay parents in particular, have explained to their children that gay people exist," one Twitter user wrote in response to Limbaugh's comments. "I guess Rush Limbaugh (and everyone he knows) is just extremely stupid."

Others argued that the conversation wasn't nearly as difficult for parents to have as it is for Limbaugh to understand. "Rush Limbaugh asked how parents are supposed to explain Mayor Pete kissing his husband to their kids. It's easy: they're in love," on Twitter user wrote. "But what if the kids ask about Rush's 4 marriages, opiate addiction, birtherism, and claims that Michael J. Fox and Ruth Ginsberg lied about being ill?"

Limbaugh's apparent fascination with Buttigieg's marriage continued Wednesday, when the radio show host shared his perspective on the primary race. He claimed the Democratic establishment was facing "some hard, cold truths" after Sen. Bernie Sanders, Buttigieg, and Sen. Amy Klobuchar finished top three in the New Hampshire primary. "So you're faced with dyed-in-the-wool socialist who's not even a Democrat," Limbaugh said. "A gay guy, 37 years old, loves kissing his husband on debate stages. Can you see Trump have fun with that?"

Limbaugh went on to claim that "the grand pooh-bahs" of the Democratic Party don't believe Klobuchar can win against Trump and don't want to see "two women in a row get wiped out by Donald Trump."

"There may be some Democrats who think, 'That's exactly what we need to do, Rush. Get a gay guy kissing his husband on stage! You ram it down Trump’s throat and beat him in the general election,'" Limbaugh continued. "Really? Having fun envisioning that."