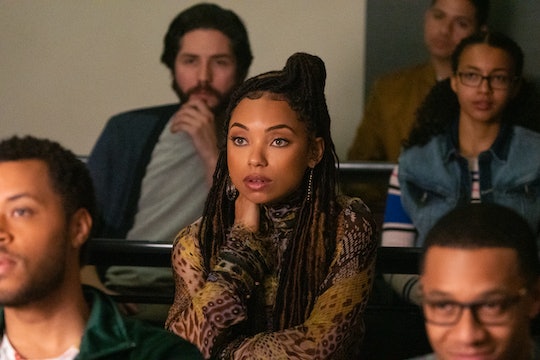 In The Year 2019, 'Dear White People' Should Be Required Viewing For Parents

When Netflix’s Dear White People debuted in 2017, it inspired some much-needed discussions about race, freedom of speech, and so-called political correctness. The show follows a group of black students facing racial tensions at a predominantly white Ivy League university, and through satire and comedy, it highlights critical social issues younger generations face. And Dear White People helped me talk about racism to my own teenage kid.

I have a daughter who will be going off to college soon, and I often wonder how she’ll manage issues such as race and freedom of speech. When I was in college, I don’t remember needing safe spaces, and most racist people I came across weren’t emboldened enough to offend me to my face. But things have changed. Racists can now use social media as an echo chamber to promote hate, and the country is led by a president whose remarks consistently incite division.

As a person of color, I’ve noticed an increase in racism and microaggressions. Just a few weeks ago, one of my neighbors told me to “go back” to my country if I didn’t like President Trump, and as shocked as I was, I couldn’t get over how confident he was in his aggression.

This is why I think it’s more important than ever to talk to kids about race, and although it’s not an easy conversation to have, it is a critical one. I hate being perceived as "preachy," but some of my white friends, including my racist neighbor, have a hard time understanding how their actions and words make me feel. What I love about Dear White People is that it uses satire and humor to invite self-reflection — a quality every kid needs to learn, regardless of race.

In Season 1, Sam White (Logan Browning), the outspoken activist and host of the campus radio show Dear White People, is dealing with racial tensions after white students attend a blackface party on campus. While the show doesn’t depict all of these white students as blatant racists, it does highlight the way some people will go along with anything to fit in as long as they’re not held accountable. This portrayal of peer-pressure racism got me talking to my daughter about standing up for what is right, no matter the social cost.

But the second, more important lesson, was that she shouldn’t ever let other people’s hatred and bigotry bring her down, especially on social media.

My daughter is a sweet and mindful person, but she still has sparks of that teenage know-it-all attitude. "I know, I know," she responded. "If someone jumps off a bridge, doesn't mean I should too." I told her she was right, but I added that it's also her job to tell the person jumping that what they're doing is wrong, and remind them how it might make others feel. I could see the gears turning in her head as she nodded in agreement.

Season 2 of Dear White People finds Sam in the middle of a Twitter feud with an alt-right racist. Initially, Sam claps back at the Twitter troll’s offensive tweets with smart, sharp-witted responses meant to shut him down. But as the troll tweets on, she finds herself stuck in a vicious battle of words, and she begins to break down emotionally. There are two important lessons I pulled from this season, and I made sure to talk to my daughter about both. One was that she can’t stop people from saying what they want, no matter how offensive, because everyone’s entitled to their freedom of speech. But the second, more important lesson, was that she shouldn’t ever let other people’s hatred and bigotry bring her down, especially on social media.

Again, my daughter answered with an exhausted, "I know, Mom," but I still took the time to remind her how much her friends and family love her, and how she should always be proud of who she is, no matter what anyone says.

Unfortunately, racism and white supremacy are finding a reemergence in American culture right now, which is why a show like Dear White People is so important.

The show is fictional, but the issues it highlights are based in reality. In 2018, fraternity students posted racist photos in blackface, reported the Wall Street Journal, and earlier this year, students from Tufts University and the University of Oklahoma shared pictures of themselves in blackface on social media.

Even beyond college campuses, racism is a real threat, and it’s been at the root of several mass shootings in the past few years. The New York Times reported white-extremist shooters were responsible for 65 deaths in seven separate incidents in the last 18 months alone. One of the most recent shootings took place in El Paso, Texas, when, according to CNN, a 21-year-old white nationalist drove to a local Walmart and killed 22 people allegedly with the specific goal of targeting immigrants.

Unfortunately, racism and white supremacy are finding a reemergence in American culture right now, which is why a show like Dear White People is so important. The series tells black stories, but its messages are for everyone, especially for those who have a hard time understanding the complexities of racist microagressions. Through the experiences of its black, biracial, and LGBTQ characters, the show offers an inside perspective on how both indirect and blatant behaviors and rhetoric affect people of color.

For parents sending their teens off to college, the real-life instances of both casual campus racism and violent racist incidents are a reminder that their kids are going to be on their own in the real world soon. And now, more than ever, families need to have these difficult conversations.

As a mom, I know that talking to teens about anything meaningful can be difficult, but in this day and age, it's growing increasingly important to have discussions about race and respect. I know Dear White People isn't the intellectual standard when it comes talking about race and identity, but the show does offer a safe space for viewers to self-reflect and think about what they see around them.