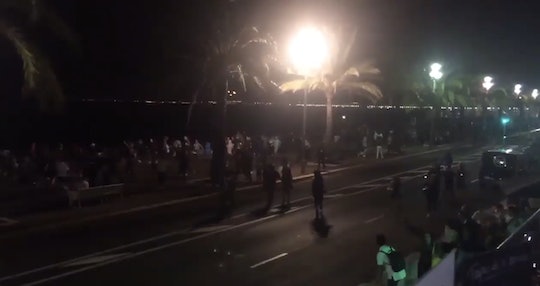 A truck plowed through the crowd at a Bastille Day celebration in Nice, France at about 11:30 p.m. this evening. Graphic images posted online show bodies strewn about the Promenade des Anglais where the truck reportedly drove through crowds that were watching a fireworks display. The death toll in the Nice truck crash continues to rise, with the Associated Press reporting "at least 60 dead."

Administrator for the Alpes-Maritimes region Sébastien Humbert told French news channel BFM-TV that there were up to 100 injuries. Humbert also reported that the driver of the vehicle was killed. Witnesses reported that "many, many," shots were fired, and the truck has been pictured with bullet holes in its windshield. According to the AP, Mayor of Nice and President of the region Christian Estrosi said that the truck was loaded with firearms and grenades.

Mayor and President Christian Estrosi has asked that residents stay home. French police force Gendarmerie Nationale tweeted: "Emergency operation in progress. Keep calm and avoid downtown area. Follow the official accounts to be informed." Facebook has enabled the Safety Check feature for those near the area where the attack occurred. The central hospital in Nice tweeted this phone number for the victims' families to contact:

There has not yet been a claim of responsibility over the attack, though prosecutors reported that "anti-terrorism investigators have taken over the investigation," according to The Guardian. CBSN reports that, even if the attacks were not carried out by ISIS, they are potentially "ISIS-inspired." Only eight months ago, 130 were killed in Paris in an attack claimed by militants allied with ISIS.

President Obama released the following statement, saying he "condemn[s] in the strongest terms what appears to be a horrific terrorist attack." The statement sent well-wishes to the families of those who were killed in the attack as well as to those who were wounded.