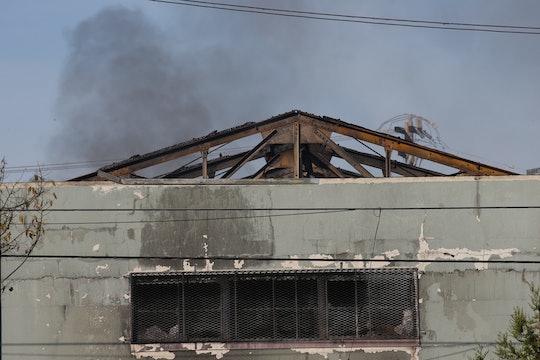 Friday was supposed to be a night of carefree fun at an electronic dance music concert for the young, artistic community in Oakland, California. The concert was being held in a warehouse known as The Ghost Ship, but a massive fire broke out around 11:30 p.m. PT. Nine people were reported dead on Saturday, however, the death toll had reached 24 by Sunday morning. Only 20 percent of the warehouse has been properly inspected since the fire was extinguished. The Oakland warehouse death toll may still continue to rise as search efforts continue over the next few days.

Update: Alameda County Sheriff's Sgt. Ray Kelly on Sunday night told AP reporters that the death toll had risen to 30. "Anxious family members who feared the worst gathered at the sheriff's office to await word on their loved ones," the AP reported. "They were told they may have to provide DNA samples to help identify remains."

The majority of those killed were found on the second floor of the building, according to Oakland Fire Chief Teresa Deloach Reed. While 24 casualties have been definitively confirmed, about 50 people are believed to have been inside the building at the time the fire broke out. USA Today reports that most of the victims are believed to be in their 20s and 30s. The Fire Chief informed reporters that as many as 40 people may have died in the blaze and the local coroner is preparing for mass casualties. According to The Los Angeles Times, the Oakland warehouse fire is the deadliest fire California has seen since the Oakland Hills fire of 1991, which left some 25 dead and at least 150 more injured.

It took the Oakland firefighters around five hours to extinguish the flames in the warehouse. The building did not appear to have a sprinkler system or smoke detectors, which were just two of the many fire safety hazards that contributed to the devastation. According to The East Bay Express, The Ghost Ship had several pending habitability complaints. The most recent of those complaints was filed in November. The owner of the building had been cited in October 2014, as well, for building housing units and other structures inside the warehouse without permits. The warehouse's Tumblr page shows pictures of the severely overcrowded and unsafe conditions inside the building.

According to AP reports, firefighters are struggling to reach the remaining bodies inside the structure. The building did not have a clear exit path, especially for those who were on the second floor at the time of the fire. The only stair case was severely dilapidated and had been haphazardly fixed up with pallets. Fire Chief Reed told the East Bay Times that the building was filled end to end with furniture, art, and other structures. She described the scene inside the severely damaged structure, saying "it was like a maze almost."

The Oakland Fire Department will have to take advanced measures to continue their search for more victims. According to USA Today, they brought in tractors, bulldozers, trucks, and a crane on Saturday night to help with the process. "We're going to have to cut a hole through the building. It's blocked at the entrance so we have to gain access on the other side," Alameda County Sheriff's Office spokesman Ray Kelly said in a press conference on Saturday, describing the damage caused by the flames. "It's very twisted debris in there. There are wires and beams and wood. It's all fallen in on itself. We're thinking about bringing in cadaver dogs and robots to get into all the crevices."

As the search for more victims continues, the community mourns the loss and continues to keep all those affected by the devastating fire in their thoughts.