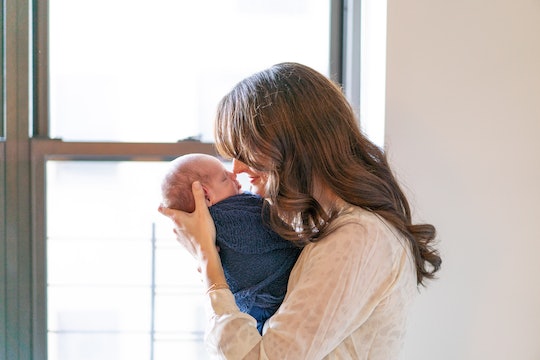 Deciding To Formula Feed Felt Like A Failure, But Shouldn't Have

Seven weeks into our son’s life, my husband brought home a container of formula and plopped it down on the kitchen table. An innocent enough act, but for a mother struggling with breastfeeding, it was the ultimate sign of failure. The decision to buy formula seemed to taunt me, and on closer inspection, I read: “Breastmilk is recommended.” Cue: hormonal postpartum tears that can’t be stopped.

When I was pregnant, if family and friends asked me if I planned to breastfeed, I’d casually respond “I’m going to give it a shot, and if it works, great!” I’d taken the breastfeeding class, studied the diagrams on a proper latch, and silently panicked as I read horror stories about bleeding, cracked nipples. My husband and I were both formula-fed, but of course I wanted to give my son what had been ingrained into me as the “perfect infant nutrition.” In the back of my mind I knew we’d both turned out fine and if we needed to resort to formula, I’d do it without second thought. That was, until I was neck-deep in with what my pediatrician jokingly referred to as the “breastfeeding illuminati.”

In the hospital, minutes after emerging, my son latched with what the nurse called “textbook form.” I accepted help from the resident lactation consultant, letting her hand express, modesty be damned as I tried to ace my first parenting test. Once we were home and my milk came in, breastfeeding continued to go well for us (save for a few sarcastic “it would be nice if you could feed the baby” comments directed at my wrong-place-at-the-wrong-time husband).

Mastitis blew into our home like a tornado and quite literally took the life out of me.

At my son’s two-week pediatrician appointment, he was back to his birth weight and our doctor congratulated me on my strong supply. I joined a new moms group and happily participated in group nursing sessions, commiserating about the joys and challenges of breastfeeding. I felt like one of the cool kids.

The day of my son’s one-month well visit, mastitis blew into our home like a tornado and quite literally took the life out of me. One minute I was fine, the next minute I was huddled shaking in the shower, the water on as hot as it could go and still not able to take the chill out of my bones. Nursing was excruciating, and I tried pumping to better control the suction and subsequent pain. To top that off, the pediatrician informed us that my son had thrush. The baby needed an oral medication every six hours, I needed an antibiotic every four, and a topical cream twice a day — on top of keeping track of feeds, burps, dirty and wet diapers, all on four-hour stretches of sleep. It’s not a time I look back on fondly.

By 6 weeks of age, my son had woken up from the sleepy, snuggly newborn phase and seemed to scream all. day. long. I nursed him for 40 minutes at a time and he barely made it two hours between feeds. The days were an endless blur, and my hazy Google searches included “how to know if your baby has colic” or “why doesn’t my newborn sleep.” I was seriously questioning why people had more than one child, and every night when my husband came home I was mid-meltdown and couldn’t wait to pass the baby off for five minutes of rest. It never occurred to me to Google “how to know if you have low milk supply.”

He wasn’t colicky, tired or cranky — he was starving. Our son hadn’t gained any weight in over two weeks.

At Thanksgiving, I felt the familiar symptoms of mastitis creep up mid-dinner at my in-laws’ country club. I had the chills, could barely move my left arm from the clogged duct, and my face went from rosy to ghostly pale in a matter of minutes. I called the skeletal staff at my doctor’s practice but couldn’t get an antibiotic until the next day. My husband and I began leaving messages for lactation consultants — two bouts of mastitis in two weeks, clogged ducts, thrush, cluster feeds… the books and class warned about these things, but I didn’t expect them to rain down on us all at once.

When we got back to the city, we saw a lactation consultant (LC) who did a weighted feed and informed us that he was getting about one ounce in a 30-minute nursing session. He wasn’t colicky, tired or cranky — he was starving. Our son hadn’t gained any weight in over two weeks. The LC put me on a rigorous schedule she dubbed “Boob Camp” — a combination of nursing, pumping and supplementing formula to get both my supply and his weight back on track. Even though he was sleeping six- and seven-hour stretches at night, I was setting alarms and pumping every three hours. I popped sunflower lecithin and fenugreek supplements like candy, ate oatmeal twice a day, tried power pumping, drank gallons of water… and still, my 30-minute pumping sessions resulted in two to three ounces at most. I was producing barely half of what my son needed to thrive. During the day, instead of playing with him, reading him stories and walking him through the park, I’d plop him in a bouncer so I could pump. My maternity leave was more than halfway over, and I felt like I barely knew him. My obsessive need to breastfeed because it was “best” was quickly becoming the worst thing for our family.

When my son was 8 weeks old, I pumped a measly ounce and then cried about my poor output and my husband gently suggested we switch over to formula. I relented, exhausted and frustrated. We continued to combine what breast milk I had stored with formula, and I feared the day my stash was gone and he would have to subside exclusively on the dirty F-word. But the day came and went, and my son was… fine. In fact, he thrived.

He gained weight at a healthy pace, began to smile, cried right on cue only when he was ready for his bottle, slept soundly and let me be the happy, doting mother I had imagined I would be. I stopped being ashamed when I had to take out a bottle filled with formula in front of other mothers. Instead, I was open about the effort I had put into breastfeeding and proud that I put my son’s physical needs above my emotional ones. I take comfort in knowing that he is progressing at the same rate as his breastfed counterparts, reaching all of the same milestones, with a world of opportunities ahead of him. Breast is best, but happy is better.

More Like This
Breastfeeding & Sex: Experts Explain What To Expect
Can You Burp A Baby Too Hard? A Pediatrician Shares Tips For Gassy Tummies
Moms, Just Eat The Fruit Dammit
Meal Prep Sucks The Fun Out Of Food