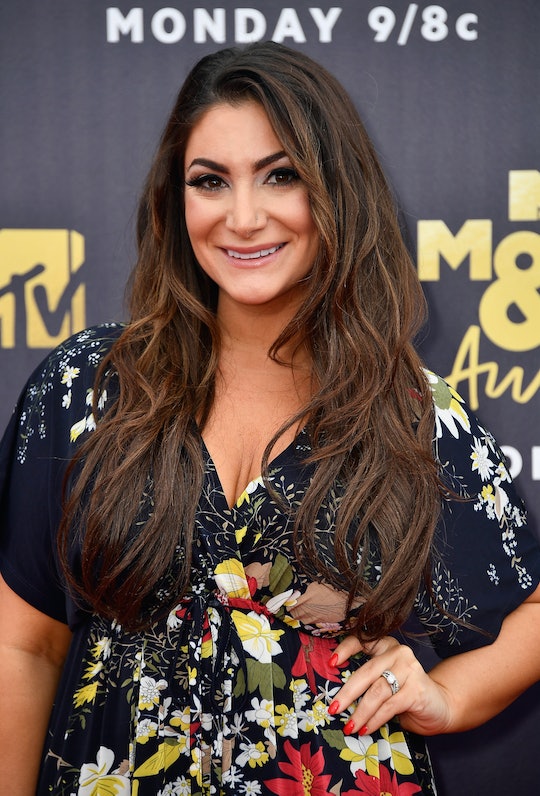 The newest Jersey Shore meatball will be making his debut super soon. Jersey Shore star Deena Cortese is currently pregnant with her first child and due any week (or day) now. If this wasn't amazing enough as it is, then Cortese's newest pregnancy update will make fans even more excited about her baby's arrival.

The cast of Jersey Shore has come a long way since their days spent fist pumping, clubbing, and drinking on the coast of New Jersey. An overwhelming amount of the cast members have settled down, gotten married, and started families of their own — and Cortese one of the latest cast members to do so. After announcing her pregnancy over the summer, Cortese and her husband, Chris Buckner, are so close to finally becoming parents and meeting their baby boy for the first time now that Cortese is 38 weeks pregnant, according to Us Weekly. So, you can clearly sense her excitement in her newest Instagram post — it's almost go time.

In the photo, shared to Cortese's account, Cortese's pregnancy bump stands out in her royal blue body-con dress, but the smile on her face says it all — she is so ready to become a mom for the first time. The photo's caption makes it all the more clear — "#mommysready," Cortese included in the caption of the photo. "#daddy'sready."

The second photo in the photoset also shows how much Cortese's bump has changed since becoming pregnant and documenting her journey, which could really not be more interesting.

Cortese's Instagram post not only shows how much her bump has changed over time, but also how she is feeling in this final stretch of her pregnancy. In the photo, Cortese informed her fans that her baby is as big as a volley ball (OMG), she is craving chocolate and eggnog (pasteurized of course, just in time for the holidays), and most importantly, she is feeling ready to go and give birth. "#letsgobabybuckner," Cortese added in the caption of the photo.

Although Cortese has just a few weeks left in her pregnancy, some fans aren't ready to see these bump updates (and pictures) leave their Instagram feeds for good. But, Cortese is unclear if she has it in her to take any more update photos with her bump. "We'll see, depending on how I feel," Cortese replied to one fan who asked if this was the last update. "And this dress is getting too tight on me."

In all seriousness, Cortese has been prepared for her son's arrival for a long time. In November, Cortese told People that she and Buckner have everything done in their home and all that is left is for her to give birth. Cortese said:

We've been getting the baby's room ready. I just had my baby shower, so we got most of our stuff. We're just anxiously waiting for him to arrive. I'm so excited, and he's moving more. It's just amazing. We can't wait for him to be here.

There is also another reason why Cortese can't wait to give birth to her son — his birth will mark the start of a new year. Cortese told Page Six that she is due on Dec. 30, which is going to make the holiday season (and 2019) even sweeter.

"Honestly, I don't care about gifts, I just want to spend time with my family," Cortese said, according to Page Six. "My best gift will be my son, due on the 30th."

Awwww. It's only a matter of time before Cortese receives her greatest present of all. Although it might be sad for fans to no longer see these bump updates, they will be replaced with photos of her son within a matter of days — and nothing is truly more exciting than that.