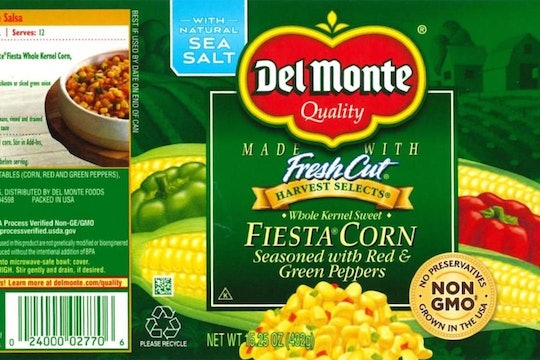 Another day, another recall. This time Del Monte Foods is recalling its canned corn due to possible botulism contamination, according to CBS News. The recall was issued Thursday for 25 states and 12 countries, the report stated.

Del Monte, a California-based food production company, recalled more than 64,000 cases of its Fiesta canned corn seasoned with red & green peppers "due to under-processing," the Food and Drug Administration (FDA) said on its website.

Translation: your corn could be contaminated with potentially life-threatening pathogens — aka germs — due to this misstep.

Del Monte did not immediately respond to Romper’s request for comment.

One of the life-threatening risks from under-processing is something called botulism, "a rare but potentially deadly illness caused by a poison most commonly produced by a germ called Clostridium botulinum," according to The Centers for Disease Control and Prevention (CDC).

"The toxin can affect your nerves, paralyze you, and even cause death," the CDC warns. Eek.

Although "there have been no reports of illness associated with these products to date," according to the CDC, it's important to toss your canned corn if its apart of the recall.

The product was sold in 25 states, according to USA Today:

The international locations include, according to the FDA:

Target and Walmart are some of the retailers affected by the recall, according to CBS News.

If you ate the recalled Fiesta Corn recently, keep a close eye on your health in the coming days. Symptoms of botulism include, according to the Mayo Clinic:

It's important to note that becoming ill with botulism is rare. A total of "205 confirmed botulism cases were reported to CDC in 2016," according to a report from the CDC. And 14 percent of those cases were foodborne-related, the report found.

Although these types of recalls can be frightening, rest assured the appropriate agencies are committed to keeping the public safe.

“Things you can have a great deal of faith in can fail. Mistakes can happen. The critical part is when mistakes happen, the federal agencies get alerted quickly and react to them and contain the problem,” The FDA’s Dr. David Acheson, the agency’s lead official on food safety, told NBC News.

To recap, be sure to confirm whether your Fiesta canned corn is apart of the recall. If so, throw out the product ASAP, and keep a close eye on your health over the next few days.

More Like This
New Study Finds Brains Of Teens Who Lived Through The Pandemic Aged Faster
"Corn Kid" Handed Out Over 40,000 Cans Of Corn At A Food Bank Ahead Of Thanksgiving
'Wednesday' Creators Say They're "Talking Amongst Ourselves About Season 2
When It’s Safe To Bring Your Newborn To A Restaurant, According To A Pediatrician