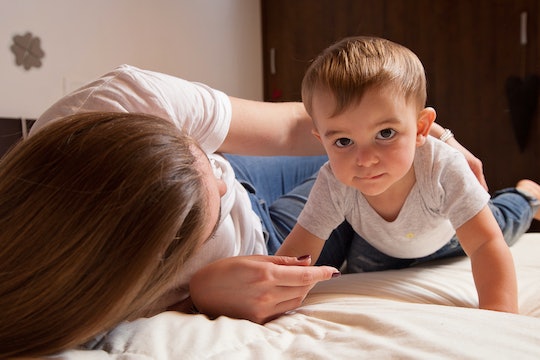 There's More Than One Kind Of Depression That Affects New Moms, So Why Aren't We Talking About It?

When freelance writer Jen Simon initially welcomed her son eight years ago, she felt great… for a short time. It wasn’t long before symptoms of postpartum depression set in — but because the onset didn’t occur immediately after she gave birth, it took her a while to realize she was what was happening.

“I felt great for the first month of my son's life, so when I started to get depressed, I didn't realize that it was postpartum depression,” she said. “The hormone shifts, in addition to the months-long sleep deprivation became more and more difficult. I began to feel hopeless, anxious, and sad… I thought things would never get better.”

Simon dealt with the depression for about two years after her son’s birth. “I developed an addiction to prescription pills,” Simon, who has written about her struggle with postpartum depression and anxiety extensively, shares. “For five years, I was addicted to opioids like Percocet and benzodiazepines like Xanax. My husband and I fought a lot about how to handle my son's sleep issues and I don't feel like our relationship has completely recovered. I feel like I missed enjoying his baby and toddler years. I just wanted to make it through that time in his life — I couldn't even imagine savoring or loving having a baby — I was only trying to survive.”

As Simon quickly learned, postpartum depression doesn’t always present right after childbirth, and its symptoms don’t always resolve a few months after delivery. That’s something not everyone realizes, though.

But is this really the case?

“Absolutely not,” says Dr. Samantha Meltzer-Brody, a perinatal psychiatrist who specializes in the issue. “Postpartum depression is definitely not something you can assume can be time-limited. There’s a spectrum, like everything, and a range of things. Certainly some women will have very mild symptoms that clear quickly, but in many cases that’s not even considered postpartum depression, that’s more the baby blues.”

For women who have postpartum depression, it can last many months, well past a year.

Women who struggle with postpartum depression can experience lifelong mental and physical health issues, according to Dr. Meltzer-Brody, who authored a study on this very topic. Per her research, women who suffer from postpartum depression are at significantly increased risk for recurrent instances of depression both related and unrelated to childbirth.

“For women who have postpartum depression, it can last many months, well past a year. There’s many studies that show if not treated adequately women suffer this for many, many years. It can be quite persistent,” says Dr. Meltzer-Brody.

Maria Lianos-Carbone, the author of Oh Baby! A Mom's Self-Care Survival Guide for the First Year, knows the long-term implications of postpartum depression all too well.

What she thought were the "baby blues" set in soon after she welcomed her son in a traumatic birth. At three weeks postpartum, she realized it was something bigger and sought treatment for depression. Fourteen years later, she’s still being treated for the issue.

I don’t think people realize maternal depression can last for months or years.

“I’m still on medication,” Lianos-Carbone says. “I did know that the first three months were going to be challenging — that I would be sleep-deprived and breastfeeding and all of those things. [I thought] once the three-month mark is over I was going to have a better handle on everything, but that didn’t quite happen. People think postpartum depression just lasts a few months and then it goes away. I don’t think people realize maternal depression can last for months or years.”

But is the term “postpartum depression” really indicative of those long-term effects? Lianos-Carbone referred to it as “maternal depression,” which she believes may be a more accurate term.

Dr. Steve Levine, a board certified psychiatrist and founder and CEO of Actify Neurotherapies, weighed in on the connotations of the term. “The very term postpartum suggests that it’s time-limited,” he said. “[There’s the idea that you] move past the postpartum period and it will be gone. We know that’s not true.”

What people get wrong about it is not speaking out about it — thinking it’s rare, thinking it’ll just go away.

“Depression is associated with dysregulation of how people handle stress and has been associated with higher rate of heart disease, heart attack [and] autoimmune illnesses,” she says. “There’s really serious endocrinological, immunological and other stress-related responses that are just really bad for women and their families.”

Which brings up another important point: The long-term ripple effect of postpartum is often underestimated. The term itself also suggests the issue is limited to a new mom’s experience, when the fact is, entire families can face persistent issues.

This news may seem alarming, but there’s an upside: All the experts agree that seeking out treatment could effectively reduce both the symptoms and long-term effects of postpartum depression. Understanding the issue is the first step. And acknowledging that it won’t necessarily go away on its own? Well, that may help women grasp the importance of addressing and treating the issue.

“Being able to quickly diagnose and treat can make an enormous difference for the woman and her child and family,” Dr. Meltzer-Brody says. “What people get wrong about it is not speaking out about it — thinking it’s rare, thinking it’ll just go away. It breaks my heart when people suffer in silence or don’t get the care that they need — which can make huge changes for them both in the short run and in the long run.”

Dr. Samantha Meltzer-Brody's title was incorrect in any earlier version of this article. It has been updated to reflect her correct title.