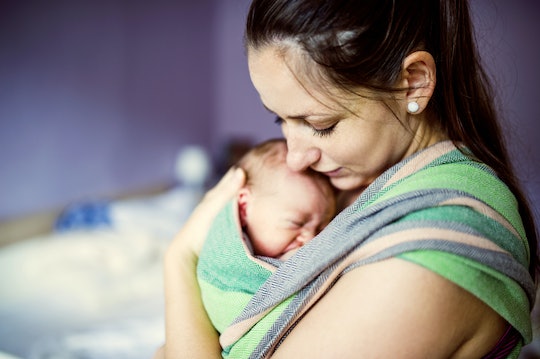 If someone were to tell you that researchers had discovered a way to potentially save the lives of tens of thousands of premature babies every single year, you may picture an expensive futuristic contraption, or an elusive new drug fresh off a gazillion rounds of testing. In reality, though the technique is simpler (and more accessible) than that — so much so that it could have been been used basically as long as humans have been having babies. Yep, it really is just that easy: Delaying umbilical cord clamping could save babies' lives. In fact, the Australian researchers who worked on this eye-opening review confirmed that waiting just a minute more to cut the cord could literally mean the difference between life and death for a lot of babies.

Researchers from the University of Sydney found that waiting just that short period of time to cut the cord after birth cut back the infants' chances of dying in the hospital by one-third, according to The Sydney Morning Herald. The authors of the study — which will soon be published in the American Journal of Obstetrics and Gynecology — reviewed the birth of about 2,800 infants born before 37 weeks' gestation from 18 trials to come to their jaw-dropping conclusion.

To say that that the widespread implementation of delayed cord-cutting for premature infants would be life-changing would be a significant understatement; as the review's lead author and neonatal specialist said, according to Science Daily, it would ensure that so many of these babies go on to live lives they otherwise would have lost:

Fears of delayed resuscitation, hypothermia, and jaundice have previously prompted medical professionals to steer clear of delayed clamping. And the researchers did concede that waiting to clamp the cord could increase a baby's risk of jaundice and polycythemia, which is a condition that results in having more red blood cells in your bloodstream than what is normal.

But researchers seem to think the benefits might outweigh the potential drawbacks. The recently published Australian Placental Transfusion Study found that preemies born 10 or more weeks early experienced a 9 percent mortality rate if their cords were cut immediately after birth, according to Science Daily, while those for whom the moment was delayed had a 6.4 percent mortality rate. The conclusions of both studies were so significant that their peer review processes were put on a "rapid track" in hopes that its findings would help change hospital policy sooner, The Sydney Morning Herald reported.

But why does delaying the cutting of the umbilical cord after birth make such a huge difference? Speaking with Australia's ABC News, University of Sydney professor Jonathan Morris hypothesized that it could give the premature babies the chance to adapt to life outside the womb; the additional white blood cells they gain better equips them to fight off infection; and clamping the cord later makes it less likely that the babies will require potentially harmful interventions such as breathing tubes. The study also found that waiting to clamp the cord improved babies' blood pressures.

In any case, it seems the study made an undeniably vital discovery in the ongoing fight to save as many premature babies as possible. Chances are that more and more hospitals will begin to adopt the practice of delayed cord cutting, which will  — if all goes as the researchers expect it to — save so many lives in the delivery room.