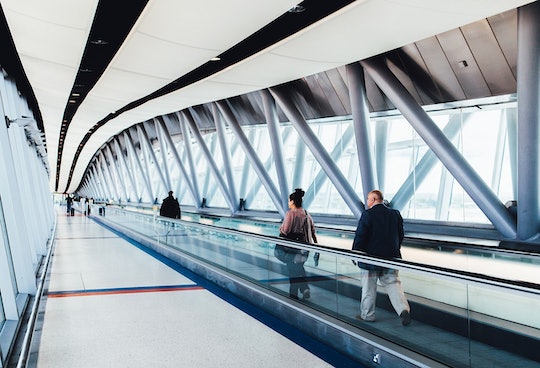 Delta Forces Mom To Dump Her Breast Milk, & Now's As Good A Time As Any To Remind You Of Your Breastfeeding Rights

Just days ago, Vanessa Kasten Urango, became the focus of now nationwide controversy. But what exactly did this Texas mother of two do? Well, according to her own Facebook page and recent news stories, Urango attempted to travel with breast milk. (Oh, the horror!) Urango, who was forced to pump when she was separated from her four-month-old daughter for 18 days, contacted Delta a week before her trip to ensure sure she was packing her frozen breast milk right, and to avoid any potential problems. Unfortunately, adhering to Delta’s regulations wasn’t enough — at least not when in the presence of untrained employees — and Urango was forced ditch the dry ice in her cooler and hope her two weeks supply stayed cold for 8 hours. In an open letter to Delta, Urango said:

They told me I could not take the breast milk on the plane because they couldn't weigh the dry ice...and because I didn't have the proper sticker on it to show it contained dry ice. I asked them where I could find such a sticker, and they just shrugged...I had no choice but to dispose of the cooler and it's contents, to which they told me I couldn't dispose of it in the airport because of the dry ice. They, of course, offered no suggestions and just left me standing helpless with a cooler full of frozen breast milk and dry ice. Luckily, some very kind and compassionate airport police officers came to my rescue...[but] two weeks worth of breast milk will have to be thrown away. I wasted so much time and money for nothing. Thanks so much to your staff for their complete lack of compassion for a tired mom who really just wants to get home to her babies.

And while I am outraged for Urango — both as a mother and a former "feeder" — being mad won’t help her (or get her milk back). But I can help educate, so what follows is a brief outline of your “breastfeeding rights.”

First and foremost, know that breastfeeding laws vary by state. According to BreastfeedingLaw.com:

There are no laws in the U.S. forbidding breastfeeding outside of the home, and only two states in which laws place any limitation on the way in which public breastfeeding may be done. However, in the absence of a law establishing and protecting the right, a woman who breastfeeds in a public accommodation—a privately owned place open to the public, such as a restaurant or shopping mall—might lawfully be asked to leave, either by the owner or in accordance with the owner’s instructions.

In essence, it is the Wild West, and exhausted, hungry, cranky moms (women with cracked nipples and worn, swollen breasts) are often left to fend for themselves. But fear not. You can get through this. Be forewarned, however, that it may take more planning, and more fighting, then it should. Especially for a country which pushes "breast as best" as much as the U.S. does.

The Transportation Security Administration writes that:

TSA adds that these liquids, "in quantities greater than 3.4 ounces or 100 milliliters are allowed in carry-on baggage," and that any accessories needed to cool formula, breast milk, and juices are allows in a carry-on. The administration nows, however, that, "these accessories are partially frozen or slushy, they are subject to the same screening," as the liquids. Parents may also bring, "gel or liquid-filled teethers, canned, jarred and processed baby food in carry-on baggage," which may also be subjected to additional screenings.

Amtrak has no specific guidelines regarding carrying on or checking breast milk or coolers. There also seems to be no policy for or against breastfeeding while on their trains. However, according to their site, it appears the use of dry ice may be problematic. So my advice: Stay clear of that and you should be fine.

This is where things get tricky because, as mentioned earlier, without a law to protect her, a woman who breastfeeds in a public accommodation, "risks being charged with some form of indecent exposure." Though, admittedly, the latter is rare. Before venturing out, make sure to read over the breastfeeding laws by state and know your rights.