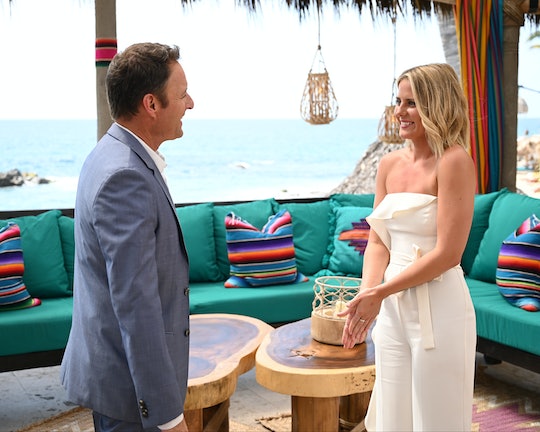 Some Bachelor in Paradise seasons feel longer than others and, perhaps because this one had so many firmly established relationships carved out so early on, Season 6 has occasionally felt interminable. But it all came to a close this week with three proposals, among them, the franchise's first-ever queer love ~journey~. Demi and Kristian got engaged on Bachelor in Paradise and it was a long, winding road, but they finally got there. From kicking off the season canoodling with Derek to realizing she still had feelings for her back-home squeeze (who just so happened to be a woman), Demi came out on national television and grappled with the realities of baby queer life in six short weeks before getting engaged.

After spending a night in the fantasy suite together, Kristian promised Demi that she would always protect her heart. Before getting down on one knee (in lucite heels) and proposing, Demi replied:

I know this that this has been really hard. I've put you through struggles and you were always there for me, regardless of how much I didn't deserve it at the time. I never knew that someone could be that patient. There were a lot of things that came between us, mostly me and my struggles. Like you said, I came here to find myself. But I found myself in you.

No, you're crying! Obviously, Demi's proposal was met with an "of course" from Kristian and they left the beach one of three engaged couples at the end of Paradise.

Needless to say, Demi's been through the ringer this season. While it seemed like she'd spend the rest of Paradise in bliss after Chris Harrison allowed Kristian to crash Bachelor Nation, Demi didn't exactly sail through the rest of it. She had a pretty relatable meltdown midway through Kristian's tenure on the show, realizing that her aversion to PDA might, in fact, be a touch of internalized homophobia. Kristian, who'd come out a few years ago and had more experience under her belt than Demi, turned out to be a super affectionate person in both romantic and platonic relationships. But Demi began to feel twinges of jealousy watching Kristian interact with her fellow cast-mates.

In one of the more nuanced discussions ever aired on the Bachelor franchise, Demi confessed during a one-on-one date that part of her reluctance to show affection stemmed from fear of being scrutinized by others. Kristian easily could have problematized the couple's gap in experience level as a potential dealbreaker, but instead, she embraced Demi's wobbles, empathized with her insecurities, and reassured Demi that she would patiently meet her where she was at. Kristian also demonstrated a commitment to helping Demi figure out what she needed to feel safer so that she could help provide it.

Considering it was among the few mature conflict resolutions Bachelor fans have ever seen, it's no surprise Demi felt confident enough to propose to Kristian on the beach in the Season 6 finale. Aside from Demi's brief dalliance with Derek at the beginning of the season, neither of them had cultivated any other romantic connections while they were in Paradise, allowing the couple to focus exclusively on their relationship hurdles.

Demi revealed in an interview with Entertainment Tonight that she began casually dating women her freshman year of college, but didn't feel comfortable disclosing that information on Colton's season of The Bachelor for fear of judgement. (Jaimi King had previously competed as an out bisexual on Nick Viall's season, but she's a few years older than Demi.) When Demi came out on Bachelor in Paradise, prompting producers to invite her girlfriend onto the show, it broke barriers for the long-running franchise; for the first time, BiP's alternating-sex rose ceremonies had to be tweaked to accommodate a same-sex couple.

But perhaps the most heartwarming thing about Demi and Kristian's relationship in Paradise was watching how warmly their cast-mates embraced them. Bachelor Nation seemed genuinely excited to support a same-sex relationship developing alongside their own, to say nothing of fans following along at home.

Demi and Kristian's road to the altar will likely be a long one, but the good news is, they have a ton of support.