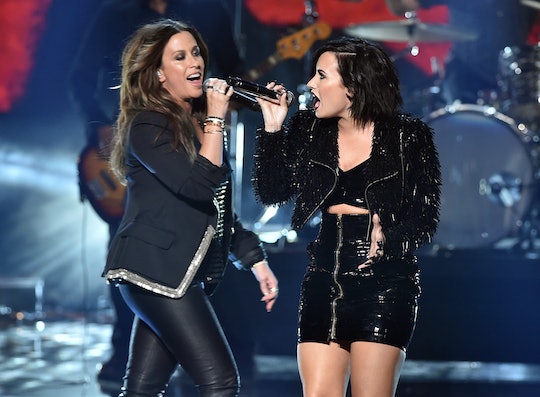 If there's one way to ensure as many people watch your awards show as possible, it's taking an artist who's much-beloved by one generation, sticking them onstage with an artist who's much-beloved by another generation, and having them perform a song that basically every human on the planet knows. Tonight's American Music Awards nailed that formula when Alanis Morissette and Demi Lovato performed "You Oughta Know" from Morissette's now-20-year-old break-out album Jagged Little Pill (but I'm going to pretend you didn't just need me to tell you that).

Alanis has been on the PR stroll lately promoting the Jagged Little Pill's 20th anniversary (BRB, mourning my lost youth), committing such arguably blasphemous acts as performing an updated rendition of "Ironic" on The Late Late Show With James Corden, and joining Taylor Swift onstage for a "You Oughta Know" duet. My unbearably superior snark aside — I was all of 10 years old when Jagged Little Pill first came out, so it held my hand through puberty angst — I don't hate any of this. For starters, Alanis should get to make money off of this album until the end of time. And the fact that she's doing things like changing lyrics and performing with girls who were 3 and 4 years old when the album originally came out just means that she doesn't take her actually iconic and legendary album, nor herself, too seriously. She's just being weird and fun and probably making bank by doing so. (I feel like she's channeling Backseat Pig-Tailed Alanis with all of this, and I'm so into it. Like, if you imagine Backseat Pig-Tailed Alanis performing with Demi Lovato, it makes heaps of sense. We're gonna find Driver's Seat Alanis locked in a closet at the end of this press tour.)

So how did Demi Lovato compare to Taylor Swift when it comes to their "You Oughta Know" duet skills? (Side note: A not-insignificant amount of Google digging did not sufficiently answer my question of whether or not Demi Lovato and Taylor Swift are friends, so I'm about to go ask the Swifties on Twitter, but I figured I'd finish this post first in case I accidentally say the wrong thing and the Swifties on Twitter eat me alive. So as of publication, I have no idea if Demi Lovato and Taylor Swift are friends, which feels like a weirdly relevant thing to include in this story. I apologize for my journalistic failing.)

Anyway, the performance was... adequate! Alanis was, of course, a radiant goddess from another dimension, but Demi didn't completely disintegrate in the presence of Alanis singing "You Oughta Know" which, frankly, makes her stronger than most humans on earth. So props for that alone. And then there's the part where she's just insanely talented.

There's also the part where Demi got to sing the most iconic angry song ever, alongside the woman who wrote it... and she couldn't be bothered to get all the words right. That was embarrassing, and we'll leave it at that, since I'm pretty sure Demi will be waking up in pools of her own icy sweat for years to come over the shame of that moment. No need to kick her while she's down. It happens (it doesn't), and it's fine (it's certainly not).

And then there's the part where Alanis is just, like, entirely too mature, well-adjusted, and clearly content in her life to pull off "You Oughta Know" levels of rage. Which, I mean, yes, good for her, but kinda blah for us. It kinda felt like Demi didn't get it nearly enough to pull it off, and Alanis is just way too far past it to sell it anymore.

But whatever. A lackluster performance by Alanis is still better than pretty much anything else on TV, and Demi's f*ck-up wasn't so egregious that we're now obligated to hate her forever, but it was just bad enough that we can feel justified in smugly expecting her to not be quite worthy of this honor. I think we can all walk away from this happy.