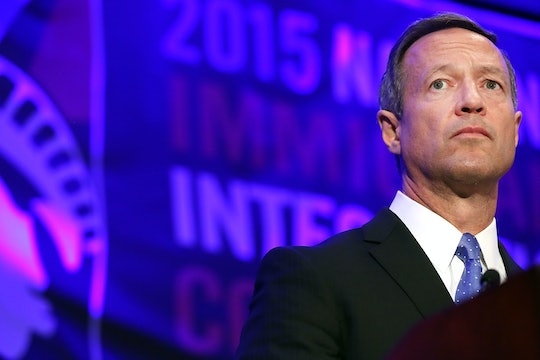 Democratic Debate Quotes About ISIS, Terrorism, & Immigration Show The Candidates Are About Policy, Not Popularity

During Saturday night's Democratic debate on ABC, national security was a priority topic of conversation. As candidates shared their strategies for taking on threats to the United States, they gave us some powerful and memorable Democratic debate quotes about ISIS and terrorism. Although Hillary Clinton, Bernie Sanders, and Martin O'Malley share a party, they have decidedly different plans for protecting the nation. Hillary Clinton provided the first quote in her opening statement:

We have a lot of work to do in this campaign to make it clear where we stand in the Democratic party ... and I look forward to this evening's discussion about the real issues that face the people.

According to ABC, the candidates do share several views. All three Democrats want to avoid sending US troops into Iraq, opting instead to support Arab nations in the fight against ISIS. They also advocate welcoming Syrian refugees to the United States while strengthening screening strategies. Clinton is more engaged in the digital side of the fight, calling for an examination of refugees' presence on social media during the screening process, asking major tech companies to play an active role in the fight against terrorism, and encouraging an evaluation of ways to mitigate the damaging potential of encryption. She also stands apart from Sanders and O'Malley in her endorsement of creating no-fly zones over Syria, involving more special forces in the Middle East, and removing Bashar al Assad from the Syrian presidency while fighting ISIS.

Right now, Clinton appears to be edging out her competitors when it comes to her approach to terrorism. According to a December Washington Post-ABC News poll, 64 percnet of Democratic-leaning adults believe Clinton would be the best at handling the terrorist threat; 26 percent sided with Sanders. She also came out ahead on understanding problems (51 percent) and being closer on issues (54 percent ), though Sanders has a six point lead on honesty and trustworthiness (44 percent versus Clinton's 38 percent).

Democratic candidates cover a range of issues during the debate, from climate change to the economy. But with terrorism hitting closer to home than ever, it's even more critical to know where they stand on fighting ISIS, and Saturday night's Democratic debate gave voters a much better idea of where they're at.

I have a strategy to defeat ISIS without getting us involved in another ground war.

I have a plan ... to go after ISIS. Not to contain them, but to defeat them.

They want American soldiers on the ground fighting them.

Countries like Saudi Arabia and Qatar have got to step up to the plate.

The U.S. is not the policeman of the world. The U.S. cannot be in perpetual warfare in the Middle East.

We have invested nowhere near what we should be investing.

The symbol of America is not a barbed wire fence — it is the Statue of Liberty.

I’m running for president because I want a new foreign policy: one that takes on ISIS, one that destroys ISIS, but does not get us involved in perpetual warfare.

Arming more people, to do what, I think is not the appropriate response to terrorism.

He is becoming ISIS' best recruiter.

If you’re going to put together a coalition in the region to take on the threat of ISIS, you don’t want to alienate the very countries and people you need to be a part of the coalition.

He thinks a low minimum wage in America is a good idea.

We should never be convinced to give up those freedoms, especially from someone as untried and incompetent as Donald Trump.

We have to have an increased vetting and screening. This takes 18 months to 24 months, it’s not going to happen overnight.

I believe that we should never give up our privacy, never should give up our freedoms, in exchange for the promise of security.

All of the candidates took a strong stance on ISIS and committed to enhancing national security. Though they differed on their approach to defeating terrorism, they reaffirmed one major message: Religious discrimination and fear-mongering will not, and cannot, be tolerated.