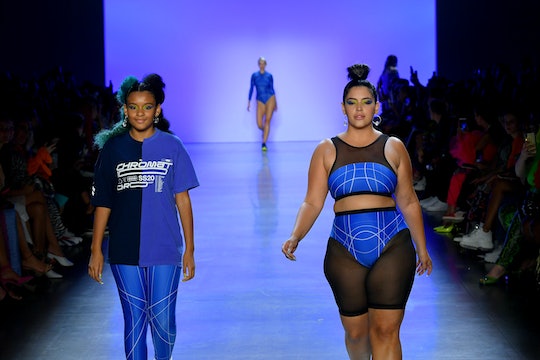 Before modeling was even on her mind, Denise Bidot was all about breaking boundaries. As a child, she recalls having a rebellious spirit, not allowing anyone stand in her way or tell her no. As a teenager, she refused to succumb to pressures to lose weight, influenced from both industry professionals and some within her family. When she rose to the top of the plus-size modeling market, she adhered closely to her body positive mentality in order to create a pathway for further models to come. And now, as a mother, Denise Bidot is raising her 11-year-old daughter Joselyn to do the same. The two walked the runway together for New York Fashion Week.

“I wasn't meant to be skinny,” Bidot tells Romper during New York Fashion Week. “I never really thought the diet culture was one for me. [I knew that this] self loathing or inability to see yourself and love yourself stops with me.”

Bidot was raised by a Puerto Rican single mother who constantly struggled with her weight and body image. Watching her mother’s yo-yo dieting battle and how it was only making her increasingly unhappy and unsettled, Bidot realized early on that weight loss was not the key to happiness, nor was attempting to fit societal norms of beauty. But in that day and age, body positivity was never discussed, and so Bidot found it difficult to broach the topic with her mother.

“Body positivity was something that was never really spoken of. Not only just within my household, but I think in a lot of households of people of my generation and older," she says. "Back then, it was unfortunately a time when everyone believed and was sold this notion that being skinny was was the goal: it was when you became happy, it was when you found your man, it was when you got your promotion—so many things in your life revolved around you being thin and beautiful.”

Whether or not her mother saw how beautiful she was, Bidot did, and that experience was formative when she turned 15 and traveled out to Los Angeles to begin auditioning as an actor. She was told, however, that her curves, boobs and butt made her only castable as a more mature woman — a common over-sexualized judgement made towards women with curves — and since she was still underage, they told her to come back to L.A. after she turned 18.

Some producer or director that can offer you a big position telling you to lose 10 or 15 pounds can cause a lot of people to go on a downward spiral.

When that day came, Bidot hit Hollywood again, ready to be booked and busy. But once more, they refused to look past her size — which at the time was a size 8 or 10. When auditioning for roles, she was told “you have too much body for that,” and was passed over. After not booking a single job, Bidot knew that Hollywood just wasn’t ready for her curves, and she was willing to wait.

“[That experience was this] beautiful kind of like revelation of my strength and power through it,” she says. “But I needed those 'no's, as hard as it sounds. I think sometimes at that age, you're really vulnerable and everything is very delicate, and some producer or director that can offer you a big position telling you to lose 10 or 15 pounds can cause a lot of people to go on a downward spiral.”

Bidot turned to makeup, going through beauty school and then working as a freelance artist. While doing one curve model’s makeup, a photographer asked if she could shoot her. She obliged, and those photos wound up getting the attention of different brands within the plus market. Though hesitant, Bidot took a leap of faith and had her first official photoshoot as a plus-size model. That experience changed her life course dramatically.

“I think it was that moment that something clicked where like I saw me through their eyes. And for the first time ever, someone was like ‘you're beautiful’ and was not asking me to change... And so I knew this was an amazing opportunity. Let's kick ass here, and I never looked back.”

From the moment she was born, I was modeling and I was like pushing for diversity and inclusivity and representation.

After the shoot, towards the end of 2006, Bidot was quickly rising as a plus-size model. Soon, however, she found out she was pregnant, and would eventually give birth to her daughter Joselyn in May of 2008. Bidot had a decision to make: As a single mother, she could take a more conventional route and get a steadier, safer job, or she could take a risk and keep her daughter by her side as she showed her the ins and outs of the modeling world and body positivity moment. Bidot chose to do the latter.

“My priorities were always really clear: It was to change the world with my kid,” she says. “[But now] she's grown up with nothing but body positivity. It's been her entire life.”

Over the past 11 years, Bidot has shown Joselyn everything about her world from the fittings to the events to the photoshoots and even the unglamorous, challenging parts.

“From the moment she was born, I was modeling and I was like pushing for diversity and inclusivity and representation. And she hears these conversations and she sees the reality of it. She gets to see the models at the photo shoots and then she gets to see the final image, and she's very clear that many times, they don't match.”

Because of this, Joselyn is less likely to believe what she sees on social media, knowing the reality may be much different, and that’s been a huge help in raising her to love any attribute society deems to be a “flaw.” On the flip side, however, Joselyn has shown Bidot that this next generation of trailblazers are much more equipped to change the world than she imagined.

“We underestimate how much that next generation really gets it. There's like that under 15 kids that have grown up in this 10-year body positivity revolution. And so they're wiser, they're bolder, they're smarter—they're not the kids that we were. And so it's really fun to see how they think how they process things. And so much of it has to do with less of what I've told her and more about what she's actually seen.”

During New York Fashion Week, Bidot and her daughter had the opportunity to walk together in the Chromat 10th year anniversary show — one of the most diverse runway shows of the season. When asked by designer Becca McCharen-Tran to walk alongside her mother in the show, Joselyn almost immediately said yes. It was an experience that neither of them will ever forget.

“It was such a special moment because... there's been such a journey that so many people haven't seen. Having that moment with her, it's like it feels so full circle for me,” Bidot says. “It's so much more than anyone can ever prepare you for the moment you walk on that runway, It’s energy, it's people, it's the bright lights, it's photographers, camera flashes and it is a long runway. It's almost like a vortex.”

That runway moment was more than just special, however. It was indicative of what the future can look like where mother and daughter can love their bodies together — regardless of size — and fight in unison against anything negative or toxic that society may say. Though being a mother is the most difficult job Bidot has taken on, it’s clearly been the most impactful, and she hopes other parents can now see the impact of what being a body positivity, unconditionally loving role model can be.

“Love yourself to the max, because once you do that, you show your children how to do it. We have to allow them to have the tools to become solid humans,” she says. “You can just tell your kid, they're powerful, and they're beautiful, and they’re able and they’re worthy of: You have to show them. You have to give the example.”