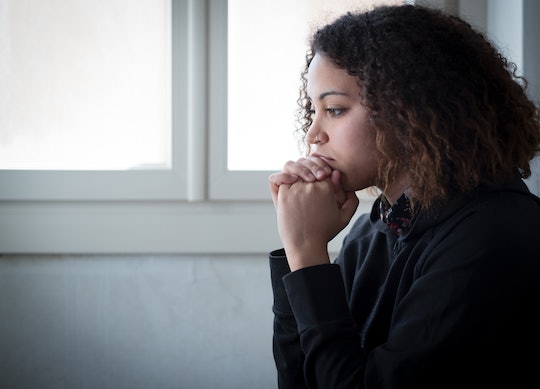 Depression & Anxiety Might Be As Detrimental To Health As Smoking & Obesity

The news always seems to be full of the information regarding hazards to your long-term health, whether it's fast food or soda or pollution, but according to a new study, less-transparent life factors such as depression and anxiety might be as detrimental to your health as smoking and obesity, which be something more unexpected.

Researchers from the University of California, San Francisco found that anxiety and depression — which many health-care providers may not be even be screening for in a quick visit — can potentially be predictors of serious things to come, like heart disease, high blood pressure, arthritis, headaches, back pain, and stomach upset, according to a release published by EurekAlert!.

This might put the two conditions on par with smoking and heavy weight gain as being a serious risk to your overall health. The findings, by Andrea Niles, Ph.D., and Aoife O'Donovan, Ph.D., both of the UCSF department of psychiatry and the San Francisco VA Medical Center, analyzed the health histories of over 15,000 older adults over the course of four years.

Of the overall group of individuals, 16 percent had high levels of anxiety and depression, 31 percent had obesity, and 14 percent smoked.

Interestingly, as a release published by Science Daily noted, the study's authors found that increased levels of depression and anxiety did not line up with greater chances of developing cancer.

The new findings underscore the fact that, according to NBC News, doctors routinely fail to address "mental wellness," although the National Institute for Mental Health noted at the beginning of the year that approximately 1 in 5 Americans, experience a mental illness or disorder in a given year.

"Anxiety and depression symptoms are strongly linked to poor physical health, yet these conditions continue to receive limited attention in primary care settings, compared to smoking and obesity," Niles of UCSF said, per Science Daily. "To our knowledge, this is the first study that directly compared anxiety and depression to obesity and smoking as prospective risk factors for disease onset in long-term studies."

The results of the study emphasize the "long-term costs of untreated depression and anxiety," said O'Donovan, per EurekAlert!. "They serve as a reminder that treating mental health conditions can save money for health systems."

This news echoes growing concerns among public-health advocates about the frequency of untreated mental illness in the United States, as per NBC News. Dr. Clare Purvis told the outlet that the out-of-pocket costs associated with seeking out mental-health improvement, such as a therapist, are just too high for most patients and under many insurance plans.

Though there is still more work to be done, at least awareness of such issues has grown now that celebrities and well-known voices from Prince William to Lady Gaga have spoken out about the importance of keeping your mental state positive.

More research is likely needed as well, but initial findings may mean that people need to pay more attention to mental health, as well as how it might affect your physical health over time.