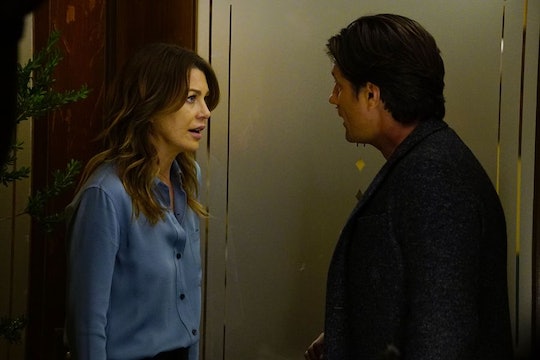 The entirety of Season 13 Episode 20, titled "In the Air Tonight," took place inside a plane, which is familiar territory for fans. Unsurprisingly, writers took advantage of the opportunity to insert some Derek flashbacks on Grey's Anatomy in order to help Meredith with her whole Dr. Riggs problem. And if you think love can't blossom while two surgeons are triaging patients on a turbulent flight that can't land, well, you're watching the wrong show.

Meredith has been a paragon of emotional stability as of late, so of course she had no qualms hopping on a plane to a conference in spite of her horrific past plane crash trauma. But when the plane she was on in present day suffers severe turbulence, she began to struggle. Flashbacks of being stranded in the woods where Lexi died, Arizona lost a limb, and Mark suffered fatal injuries started plaguing Meredith, but she had to stay focused. Why? Because the turbulence came on suddenly while the Fasten Seatbelt sign was off and a whole bunch of passengers suffered injuries.

She and Riggs (because, of course, they were both on their way to the same conference) began triaging patients whose injuries range from head lacerations to a pulmonary hypertension crash to a brain bleed that literally got fixed with a tiny drink straw. Riggs took the opportunity of being trapped in a metal tube in the sky with his crush to quiz her on why exactly she won't date him when they share such good chemistry. Meredith tried to blame Maggie again, but she eventually let slip, "Because I'm married."

It's clear she has Derek on the brain, possibly more than she'd like, and that starting to fall for someone new might feel like a kind of loss. She cycled through her memories of Derek throughout the episode, eventually focusing on the good memories of him to give her the courage to accept Riggs' invitation to share a hotel room.

Previews for the next episode, airing April 27, show Meredith and Riggs officially together and seemingly not hiding it from anyone, including Maggie. While some more dogmatic Grey's fans tend to stage hostile social media campaigns anytime something threatens their OTP, they would do well to remember that the show is called Grey's Anatomy. As in, Meredith Grey is its lead, not her late husband, no matter how dreamy his hair was. She has the right to move on romantically, and, as the writers have made pretty clear, it's what Derek would have wanted for her.

Fans don't necessarily have to ship Meredith and Riggs, but they could at least support her having nice things (with Australian accents).