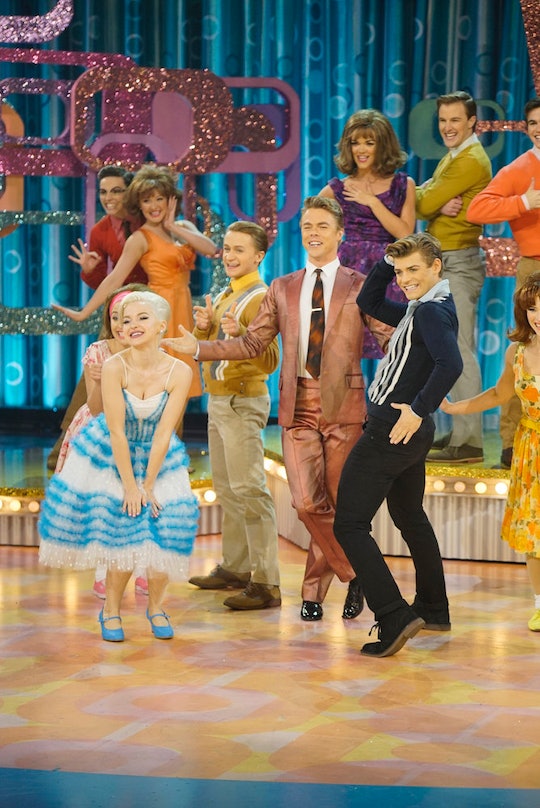 Hairspray Live! is here and it is every bit as amazing and glorious as everyone predicted it would be. And there is one man who is leading the league: Derek Hough wins Hairspray Live! and if you weren't a fan before, you certainly are now. Anyone who has had even the most peripheral of acquaintances with the show Dancing With the Stars knows Derek Hough as the boyishly charming and lovable dancer who literally just can't lose. So it was pretty much a given that he was going to kill it in the dance department. But he was also recently on Broadway starring in Singin' in the Rain, in Gene Kelly's possibly most iconic role. So yeah, he's got musical theater chops.

It is evident right from the get-go that Hough is an absolute pro when it comes to this stuff. Much like his character, Corny Collins, Hough is the ultimate song-and-dance man and he knows exactly what he's doing. He so fully embraced his cheesy, lovable, yet insufferable persona that he was actually mistaken on Twitter for Ryan Seacrest. And as much talent as there is on that stage right now, I have to say that I think Hough outshines them all.

Even when he's hawking Oreos for his product placement, Hough is completely charming and adorable, from the mugging to the camera to the cookie toss. He's so cute that I can even forget that my TV transitioned from this moment directly into an actual Oreos ad.

It shouldn't have come as a huge surprise, seeing as he did just do a stint on Broadway, but a lot of people who only knew him from Dancing With the Stars didn't realize that Hough could sing too. And he sings well. This is on top of the acting ability, which has apparently been dormant for all of these years. If we still lived in an age when movie musicals were a big thing, Hough would probably be at Brad Pitt levels of fame right now.

Corny Collins isn't a huge character in the show, as most of the action surrounds Tracy and her friends and parents, but Hough has managed to completely control every scene he's in. No matter what's happening, somehow I always seem to be most captivated by Hough. Even when I found him to be a bit irritating on Dancing With the Stars, he is completely in his element here.