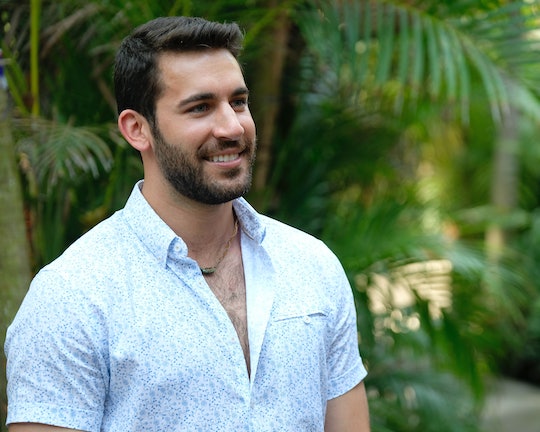 Though there have been some truly great doppelgängers in Bachelor history, the resemblance between Derek and John Krasinski on Bachelor in Paradise has followed him from past summers onto this season. Twitter is all over it, yet again, and the memes have already begun.

Derek comes to BiP from JoJo's season of The Bachelorette, and he first appeared in Paradise back in Season 4. He and Taylor Nolan, from Nick's season of The Bachelor, hit it off right away in the summer of 2017, and they walked away from Paradise as one of three engagements at the end of the season. (Derek memorably waited until the reunion show to pop the question in front of the live studio audience, which gave their relationship a special little extra Jim-and-Pam, will-they-or-won't-they boost.) But roughly a year later, they'd split up over the distance. In a joint statement to E! News at the time, Derek and Taylor said:

It is with much sadness that we have decided to end our engagement. We put everything we could into our relationship and are heartbroken to go forward separately, but we know this is the best decision for the both of us. We will still be present in each other's lives with support, admiration and respect for each other.

Then, Wells Adams introduced Derek to The Hills alum Stephanie Pratt in March of 2019, according to Us Weekly. The pair had a brief fling, but she sent him well wishes on his BiP round two journey, so it seems like they split amicably, too. While approximately zero relationship baggage has followed Derek onto BiP, his reputation as the Jim Halpert of Paradise has.

Twitter is rife with side-by-sides of Derek and Krasinski, who, yes, look super alike, from their large foreheads and lush hairlines to their blue eyes and identical scruff. But this comparison has been around since Derek's time on JoJo's season. That's when he first posted his own side-by-side on Instagram, joking, "I just don't see it," followed by a smirking emoji. Of course, those comparisons followed him to BiP, where people have been making them since his first appearance there in 2017.

This season, Derek appeared to have a strong early connection with Demi, but viewers already know from the Season 6 trailer that she spends the majority of her season with a mystery woman. Demi accepted Derek's first rose of the summer, but it would seem that their connection has an ominously looming expiration date. Will Derek be able to regroup and find love with someone else? Will he totally spiral over being dumped for a woman? It's early days yet, so anything can happen.

For now, Derek and Demi continue to be canoodling in corners and making out in dimly lit pools. And based on his last stint in Paradise, Derek seems pretty monoga-minded, so it may be tough for him to move forward and make another connection if this goes on much longer.