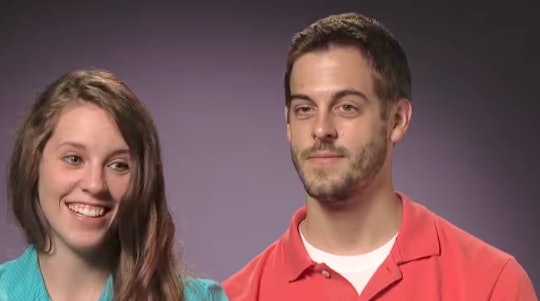 After he made several recent negative and transphobic tweets about fellow TLC star Jazz Jennings, TLC released a statement saying it has "no plans" to feature Jill Duggar's husband, Derick Dillard, on Counting On in the future. And Derick Dillard's response to TLC and the backlash against his tweets about Jennings is lacking, to say the least. Dillard has been tweeting, but an official response about the situation may be more than people should hope for.

After Dillard posted several tweets criticizing and misgendering I Am Jazz star Jennings on Thursday, TLC released a statement on Twitter about Dillard and the situation, according to USA Today:

We want to let our viewers know that Derick Dillard has not participated in Counting On for months and the network has no plans to feature him in the future. We want to reiterate that Derick's personal statements do not reflect the views of the network. TLC is proud to share the story of Jazz Jennings and her family and will continue to do so.

The "we want to reiterate" part may have been included because this isn't the first time Dillard tweeted about Jennings, and it's not the first time TLC has had to respond to negative publicity due to Dillard's tweets.

TLC/Discovery Communications and Dillard did not immediately respond to Romper's request for additional comment regarding the fact that Dillard will no longer appear on Counting On.

The first time Dillard made comments about Jennings on Twitter, he tweeted a response to a TLC tweet promoting I Am Jazz, and said, "What an oxymoron... a 'reality' show which follows a non-reality. 'Transgender' is a myth. Gender is not fluid; it's ordained by God." Of course, science supports non-binary gender identities, and transgender individuals are far from being a "myth."

And when Dillard was criticized for his response, he also tweeted, "I want to be clear. I have nothing against him. I only have issue with the words and definitions being propagated here."

At the time, TLC issued a statement regarding Dillard’s tweet that read, “Derick Dillard’s personal statement does not represent the views of TLC," according to People. And Dillard didn't seem to tweet about the subject again for awhile.

Until last week, anyway. The latest season of the show Counting On — featuring Derick's wife, Jill (Duggar) Dillard, and other members of her 19 Kids and Counting family — recently ended, and apparently Dillard decided this was a good time to go after another star on the same network. At the very least, that's not very wise of Dillard, and at its worst, it seems like bullying on his part. Jennings is 16 years old, and, as fans have pointed out, it's definitely not OK for a 28-year-old man to spread hateful messages about her, for a second time, on social media.

When another Twitter user replied to a more recent tweet of Dillard's and said that sometimes his tweets can come across as "hateful," specifically when he calls someone's identity "an oxymoron," Dillard responded on Thursday by directly targeting Jennings and her parents. He tweeted, among other hateful and inappropriate messages:

I pity Jazz, 4 those who take advantage of him in order 2 promote their agenda, including the parents who allow these kinds of decisions 2 be made by a child. It’s sad that ppl would use a juvenile this way. Again, nothing against him, just unfortunate what’s on tv these days.

TLC released the response about Dillard no longer being featured on Counting On after those tweets, so it's likely that Dillard's social media activity, and fan response to it, were a factor in the decision.

So how has Dillard responded to TLC's statement, and to people questioning his tweets about Jennings? He hasn't really done so formally, though he has been tweeting since the news broke.

Dillard has tweeted a few Bible verses, including several that have to do with trusting faith or feeling "justified" by it. He also tweeted a link to a GoFundMe campaign seeking donations for "missions" he's planning to complete in the future.

Interestingly enough, when someone asked him whether Jennings would receive a "thank you" video if she donated $50 to the campaign, as promised for a "Gold Level" donation, Dillard replied with a simple "Yes" on Twitter.

But as far as an official response to the news that he won't be featured on Counting On, Dillard doesn't seem to have offered any such thing so far. Some fans are going as far as to demand an apology from Dillard for his tweets, which is important because it highlights the fact that these tweets weren't about Dillard — they were about Jennings. Jennings has yet to publicly speak out on TLC's stance, and her representative did not immediately respond to Romper's request for comment. What matters here is her voice and her platform, and the repeated targeting she faces online from someone like Dillard proves just how critical it is that we combat transphobia in any way we can.