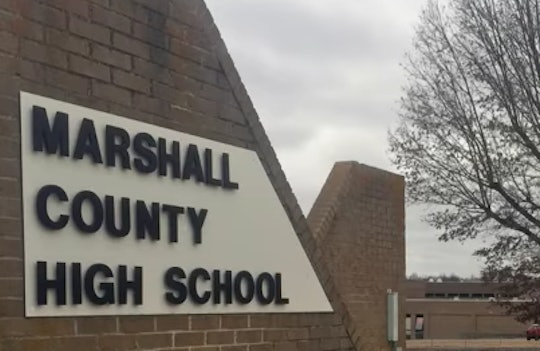 Details About The Kentucky High School Shooting Are Heartbreaking

Very sad news out of Kentucky this Tuesday afternoon. Fourteen people were wounded via gunfire, and two people were killed, when a shooter opened fire Tuesday morning at Marshall County High School, according to Kentucky Gov. Matt Bevin and CNN. Officials are slowly releasing more details about the Kentucky shooting as they try to piece together exactly what happened at Marshall County High School.

The shooter opened fire around 8 a.m. local time on Tuesday, injuring several people, according to Vox. Fourteen of those injured have gunshot wounds, and five people sustained other injuries in the attack, according to The Cincinnati Inquirer. That means a total of 19 people were wounded in the incident, though it doesn't appear that all of them were hurt as a direct result of the suspect shooting them.

Unfortunately, at least two students were killed in the shooting, according to Bevin. A 15-year-old girl was killed on campus, and a 15-year-old boy later died at the hospital, Vox reported. A local business owner said hundreds of students fled the school during the shooting, although the shooter is no longer a threat at the school — he was apprehended at the scene, according to the Associated Press. And Kentucky State Police Lt. Michael Webb said the alleged shooter will be charged with murder and attempted murder.

As more details come out about the shooting, the whole thing just gets sadder and sadder — though, of course, any school shooting is an absolute tragedy. First of all, this was the first fatal school shooting in the United States in 2018, according to The Chicago Tribune. But it was not the first school shooting of 2018.

There was another school shooting in Texas just a day earlier, on Monday in the town of Italy, according to NBC News. And it was reportedly not even the first one in the U.S. this year — Everytown for Gun Safety, which "seeks to improve our understanding of the causes of gun violence and the means to reduce it," listed seven other incidents this year alone on its website.

The one victim in the attack in Texas was taken to the hospital to be treated for injuries, though authorities declined to comment any more on her condition. But the fact that two school shootings took place in the United States in the same week is really horrifying, though it's not shocking. And with no current motive for the shooting in Kentucky, parents there are left to wonder why one of their kids' classmates would do this, and parents everywhere are again reminded that they have to worry about their kids' safety at school.

A 17-year-old student with a disability, Daniel Austin, was hospitalized after the attack, according to CNN. His parents reportedly called his cell phone repeatedly to try to get a hold of him, until someone in the emergency room picked up and told them their son had been shot. His mother, Andrea, told CNN she has no idea how this could have happened, and said of Daniel:

Teachers love him. Students love him. I don't think anything can say one bad thing about him. And that's not because I'm his mom. Everybody loves him.

And her reaction is not out of the ordinary. Whenever something like this happens, loved ones are left to wonder what happened to their child. Since 2013, there have been almost 300 school shootings in America — that's an average of about one a week, according to Everytown for Gun Safety. That's a lot of family members, friends, and other loved ones left to wonder how something like this could happen.

Andrea Austin commended the "heroics" of a fellow student and a teacher after the event. They reportedly scooped up Daniel after the gunfire ceased, rushed him to a car, then drove him to the hospital, according to CNN. It's details like that that make me feel some hope, even in the midst of such a terrible tragedy.

Five of the wounded were flown about 120 miles to Nashville, Tennessee, to the Vanderbilt University Medical Center, spokeswoman Tavia Smith told The Chicago Tribune. The unharmed students who stayed in Benton, Kentucky, told the Tribune that when the attack occurred, they were talking about things like an upcoming basketball game and chatting about makeup — typical of just about any teenager in high school in the U.S. After the shots rang out, students ran to a nearby McDonald's, or local businesses, then clung to each other or their parents when they reached safety.

All of the victims of the Marshall County High School shooting are believed to be students, according to TIME. This might be the first fatal school shooting in the U.S. in 2018, but there's a horrifying chance that it won't be the last. Isn't it about time we get serious about dealing with this problem? I know I would love to stop seeing and writing these headlines, and hope to one day stop having to wait for the details of the latest school shooting, in a vain attempt to piece together why and how something so horrible could happen — yet again.