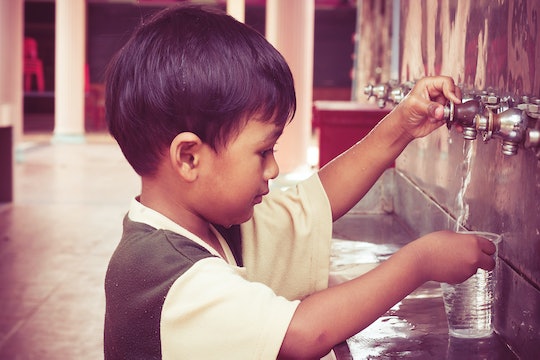 All Detroit Public Schools Are Without Running Water Due To Contamination

The state of Michigan has been in the news on many occasions over the past few years, mostly due to the water crisis in Flint, Michigan. And now, the issue of water contamination has made its way to another Michigan city: Detroit. This week, officials tested the water supply in 24 schools, and found that 16 Detroit public schools' water supplies all had elevated levels of copper or lead, the Detroit Free Press reported. Because of this, Detroit authorities shut off the water supply at all 16 public schools on Wednesday, bringing the total number of schools without water in Detroit to 34.

While that news sounds scary, the action was mostly precautionary, and officials do not believe students are at risk of illness due to the contamination. “We have no reason to believe that any children have been harmed,” Chrystal Wilson, a spokeswoman for the school district, said in a statement, the Huffington Post reported.

Nikolai Vitti, the Detroit Public Schools Community District superintendent, echoed that sentiment. "Although we have no evidence that there are elevated levels of copper or lead in our other schools where we are awaiting test results, out of an abundance of caution and concern for the safety of our students and employees, I am turning off all drinking water in our schools until a deeper and broader analysis can be conducted to determine the long-term solutions for all schools," he said in a statement, the Detroit Free Press reported.

Vitti also clarified that shutting off the water was not an order from a higher power, but a decision within the district. "This was not required by federal, state or city law or mandate," Vitti said, according to the Detroit Free Press. "This testing, unlike previous testing, evaluated all water sources from sinks to drinking fountains."

Lead and copper water contamination happens when pipes containing lead begin to corrode (gradually weaken and become damaged), according to the Environmental Protection Agency (EPA). This can cause lead or copper to leach into water, and exposure to these chemicals can cause health issues as simple as stomach distress, and as complex as brain damage, the EPA explained. Notably, those most at risk of illness due to water contamination are fetuses, infants, and young children, meaning the children at the Detroit public schools are at a higher risk than adults there. As the EPA explained, the amount of lead that can harm a child is usually much less than the amount of lead that can harm an adult. Children exposed to "low levels" of lead contamination have experienced "damage to the central and peripheral nervous system, learning disabilities, shorter stature, impaired hearing, and impaired formation and function of blood cells," the EPA noted.

Until the water supply is deemed safe for the Detroit schools in question, students will be supplied with bottled water. John Roach, a spokesman for Detroit's Mayor Mike Duggan, told the Detroit Free Press that the mayor is "fully supportive" of Vitti's decision to shut off the water. He told the newspaper in a statement:

We will be supporting Dr. Vitti in an advisory capacity through the health department and the DWSD (Detroit Water and Sewerage Department) has offered to partner with the district on any follow-up testing that needs to be done ... We also will be reaching out to charter (school) operators in the coming days to work with them on a possible similar testing strategy to the voluntary one Dr. Vitti has implemented.

According to CBS, school is scheduled to start on Tuesday in the Detroit district where more than 47,000 students attend public schools.