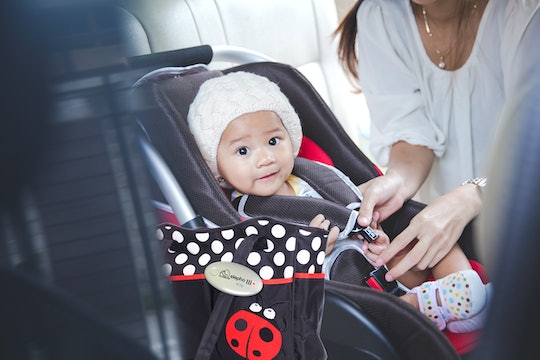 When news reports about children left in hot cars come across your social media feed, it's easy to say "that could never happen to me." But the scary truth is that none of us are immune, and to help keep babies safer, eClip, a device to prevent hot car deaths, aims to address "forgotten baby syndrome" head on.

Elepho, a parenting wellness gadget company, has developed an alarm to alert parents or caretakers when they have left their car without their child. The device, aptly named eClip, can be attached to the inside of the car, on a diaper bag, or on the carseat itself. Using low-energy Bluetooth and advance patent pending technology, the device connects to an app on your smartphone and alerts you if you are more than 25 feet from your car with the child still in their carseat.

eClip, which costs $49.95, also works as an in-car thermometer, monitoring the temperature in the backseat to keep your child's environment safe and comfortable. Additionally, the device contains no small parts that pose choking hazards and was designed so that children cannot turn it off on their own.

Michael Braunold, CEO of Elepho, tells Romper that the idea for eClip came following research into "forgotten baby syndrome." As David Diamond, Ph.D, a professor of psychology at the University of South Florida, explained to Consumer Reports, forgetting a child in a car, for example, is "not a negligence problem, but a memory problem." So after a successful KickStarter campaign and a "consumer dialogue essentially to better understand the positioning of a product like eClip in the baby market," Elepho launched the device earlier this year.

And the decision to link the device to a smartphone app was only natural. "With our dependence on the Smartphones to manage our lives we decided to base a solution around a dedicated Smartphone app so parents would not need to change their current lifestyle habits, especially when transporting a baby in a car," Braunold says.

As a parent himself, Braunold understands the hectic lifestyle that parents lead. "Parenting is most challenging, especially when you have to balance child-care activities along with your other daily activities, be it professional or otherwise," he says. And that's when forgotten baby syndrome can occur.

"FBS occurs when there is a change to someone’s routine, such as dropping a child off at daycare when this is not normally performed," Braunold says. "We are programmed to drive from point to point, especially in a routine like driving to work, and we do this on auto-pilot so if a change is required we sometimes forget — classic FBS."

Despite the company's good intentions to save lives and help parents, criticism still came flooding in. Braunold says that the KickStarter campaign received "a fair amount of comments (and verbal abuse) from those who said FBS can only happen to ‘bad’ parents and those parents shouldn’t have children."

But, in time, parents started opening up about their own experiences with FBS and medical professionals explained that it can happen to anyone. For example, as Dr. Diamond explained to Consumer Reports in July 2019, "The most common response is that only bad or negligent parents forget kids in cars... It's a matter of circumstances. It can happen to everyone."

Braunold tells Romper that "sometimes the awareness of the problem can be the best prevention and if we’ve achieved that alone, all our efforts to date will have been worthwhile."

Along with using eClip, Braunold recommends that parents be aware of FBS and accept that it truly can happen to anyone. "In the majority of cases reported and analyzed when babies have been tragically forgotten in cars, the parents have been good, loving and caring and — in many cases — professionals who would never consider doing anything to put their loved ones in danger, especially babies who are totally dependent on them," he says.

Additionally, as the American Academy of Pediatrics recommends, parents should make a habit out of checking the rear of your car before you walk away — even when you know your child isn't there. A spilt second lapse in awareness can have devastating consequences. While forgotten baby syndrome is real, there are steps you can take to help prevent it.