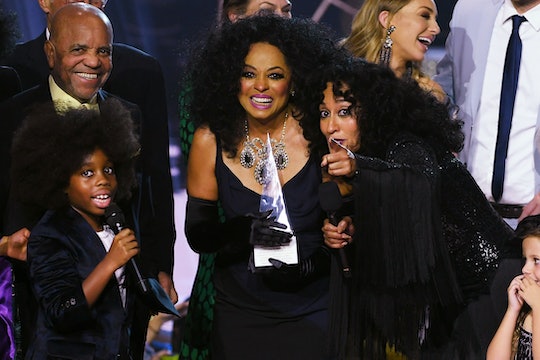 Sunday night was a big night for the Ross family. Not only is the family matriarch one of the world's most premiere performers and legends, but she is also the recipient of this year's Lifetime Achievement Award at the 2017 American Music Awards. What's more, it was her family who honored the Diana Ross with the iconic award, and there couldn't have been a sweeter family moment.

While her daughter Tracee Ellis Ross hosted the event on her own — cracking a lot of jokes along the way — it was clear from the beginning that she (and the whole family) was most excited to see her mom honored for her legacy. In fact, the Ross family was out in full force for the evening, with Ross hitting the red carpet with her daughters Tracee, 45, Chudney, 42, and Rhonda Ross Kendrick, 46, and her son, Ross Naess, 30. And that's not all. People also reported that Ross' son "Evan Ross, 29, was accompanied by his wife Ashlee Simpson Ross along with their 2-year-old daughter Jagger Snow and her 8-year-old son Bronx Mowgli, whose father is Fall Out Boy’s Pete Wentz."

It was definitely a family night, and why shouldn't it be? Diana Ross is one of music's most legendary icons, and at 73 years old, she looks to have never been happier.

Presenting their mother with the award, according to the New York Daily News, son Evan said:

What do you get when you cross a chart-topping singer, trailblazing style icon, record-breaking pioneer, international superstar, and an all-around boss? Everybody, you get my mom. Miss Diana Ross.

A video montage then showed Ross in some of her most famous and recognizable roles, just before she made her entrance to the stage singing "I’m Coming Out." After several more iconic hits, her grandchildren joined the music legend on stage for "Ain’t No Mountain High Enough."

And to make the evening even more sentimental, her daughter Tracee presented her with the special award, according to E! News.

After being presented the award by her own family, according to the New York Daily News, Ross said it was "all about love," adding:

This says it all. This is my family. And I'm sending love out there to all of you, each and every one of you of our global family. And I really, really love being here, and I feel so humbled by this. I love you so very much. And I think you know that. I really love you so much. And I will hold on to that beautiful honor. Thank you so much. Thank you, thank you, thank you.

And Twitter certainly could not be happier the Ross family's legendary mother (and totally in love with her grandkid sidekicks):

Clearly, this Lifetime Achievement Award is well-deserved. And her daughter Tracee agrees. In fact, to Tracee, her mother is the biggest influencer in her life. "As we have seen through my career, just about everything I wear is paying tribute to my mom," she told The Hollywood Reporter. "Her style influenced me in such a major way that I can’t help it ... Sometimes I’m thinking I’m doing something so original and then I’ll see pictures of my mom and I’m like, ‘Oh.’ Basically, I just copied an outfit of my mom."

Tracee also emphasized how important it was for her to see younger people appreciate her mother's impact on music. Speaking to People, Tracee said:

I’m excited that a younger generation gets to witness that, even just through the television screen. Also, I think it’s a really extraordinary thing to honor somebody who’s had such an everlasting career, whose music has touched lives in such a poignant and special way. Music reaches into your heart, and my mom’s voice has been a part of people’s lives for a long time.

Being able to present your own mom (and grandmother) with such an important award is something only a select numer of families will get to do in a lifetime. And the way Ross' family honored her sets the bar pretty high.