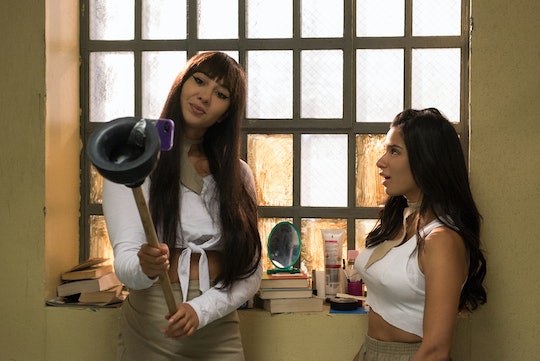 Warning: OITNB Seasons 1-4 spoilers ahead! Since its premiere in 2013, Orange Is the New Black has captivated audiences for a variety of reasons. The characters feel real and raw, making them easy to root for — in spite of the fact that they're all technically criminals. The storylines presented are gripping and often timely, further drawing audiences into the inmates' lives at Litchfield. From the cruel treatment of Sophia (one of television's leading transgender characters) in the SHU to Poussey's heartbreaking death at the hands of law enforcement (an important nod to the Black Lives Matter movement), representation is essential to this show. However, actress Diane Guerrero (who plays Maritza Ramos on the show) says immigration is one topic OITNB should cover.

"I would like to see some sort of immigration topics,” Guerrero tells reporters at a Netflix press event, though she is highly confident that it's bound to happen in the very near future. "I don’t doubt that it will, especially now under this political climate. How everything is so heightened and these bans are coming up and you talk of a wall and things like that. It’s so timely, I don’t see how we wouldn’t bring it up."

And timely it is. Long before he ever became president, Donald Trump has threatened to build a wall as a way to stop illegal immigrants (and drug trades) from crossing the boarders into the United States. In fact, this was one of the main campaign promises he made during the 2016 election and is something he still seems intent to accomplish to this day. And, let's not forget when Trump signed an executive action for the "extreme vetting" of immigrants back in January, eventually calling it a "travel ban" in a tweet in June. Taking all of that into consideration, it feels almost inevitable that OITNB's creator Jenji Kohan will find a way to incorporate such an important topic into the Litchfield world.

As for her own individual character, Guerrero was happy to see Maritza get a more in-depth storyline last season when CO Humphrey made her play the most disturbing "Would You Rather" game ever by forcing her to eat a baby mouse. Guerrero says she admires Maritza's ability to bounce back to her former bubbly self in Season 5 and thinks it shows a lot about her character. “It just shows you just the strength of some of these women, in particular, Maritza," she explains. "You would sort of see her as this... weak character. She’s always silly, she’s funny... and then this happened, I think you see a lot of her strength.”

However, she's also thankful to serve as the comic relief for the show when needed. "Our silliness is helpful… but I mean, it’s real life, too," Guerrero states. "You can’t laugh without crying, cry without laughing. That’s what you do as a human being." And we could all use a little bit of extra laughter these days, both inside of Litchfield and in real life.