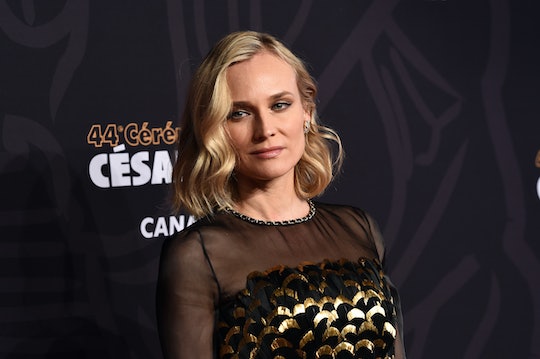 Diane Kruger's Comments About Motherhood Show Everyone Has A Different Timeline

Although more women are postponing childhood these days — having their first babies in their 30s, rather than their 20s — first-time moms who are over 40 are also on the rise. Unfortunately, there can be a stigma attached to being an older mom. However, Diane Kruger's comments about her life since becoming a mom prove there's no perfect timeline for parenthood.

As Us Weekly reported, Kruger welcomed her first child with partner Norman Reedus in November. (Reedus also shares son Mingus with his ex Helena Christensen, according to the publication.) Although the actress didn't make an official birth announcement at the time — and still hasn't shared the name of her child — Kruger later revealed during an interview with Extra that she and Reedus had welcomed a baby girl. "She's very little, but I'm tired," the new mom told Extra. "I feel like a superhero right now."

Recently, the 42-year-old actress chatted with the French magazine Madame Figaro about how becoming a mom has changed her life. Before welcoming her baby girl, Kruger was "fine without" children. "For a long time, the desire for a child didn’t preoccupy me," Kruger told the magazine, per People. "I had my ways. I was fine without one. In short, I didn’t feel absolutely ready. Life ensured my daughter arrived at the right time. It was a surprise, and she is beautiful."

Kruger also revealed she's now taking at least six months off work to spend time with her daughter. "I worked during my pregnancy and when I finally stopped, I felt serenity. I didn’t feel silly missing a role," she told Madame Figaro, per People. "Today, only my daughter counts. Not sleeping for 24 hours doesn't matter to me, traveling with suitcases and suitcases and more suitcases doesn’t bother me at all because for the moment, she is well."

At the end of March, the Walking Dead actor also shared an amusing tidbit of information about his daughter with Kruger. "She’s kind of rolling all over the floor like a drunk. It’s kind of awesome. I just love it,” Reedus, 50, told People. "She’s really grounding and it’s a really beautiful thing that’s going on in my life right now, I have to say." (Aww!)

Although the new mom has yet to share any photos of her baby girl via social media, she has showed off her impressive post-pregnancy abs, according to ET Online. About two weeks ago, Kruger shared a photo of herself in the gym, writing, "Am I showing off ? F*ck yeah. ‘cause it’s been hard work to get my abs back. I didn’t think it was possible after having a baby. And certainly not at my age ... The female body is AMAZING 😉 ."

Clearly, having a baby in her 40s — even if it wasn't technically planned that way — has worked out just fine for Diane Kruger. The actress has admitted that she was "too selfish" to want children until she was 35, as per Net-A-Porter's Porter. And if you ask me, it's awesome that she's so self-aware about this. Because there's no one-size-fits-all, "perfect" age for parenthood; everyone has their own timeline. And that's perfectly OK.