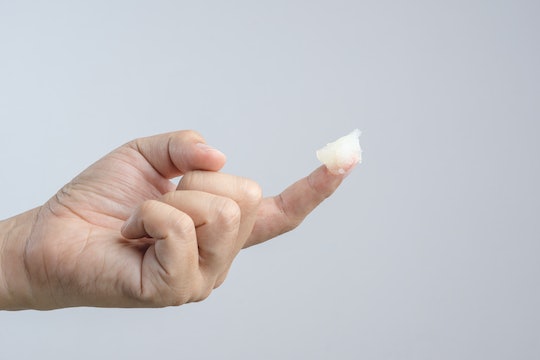 If you have diaper cream somewhere in your home, chances are, you associate it with unpleasant memories of lathering up your baby's tush numerous times a day for months on end. But apparently, diaper rash is not the only thing diaper cream can treat. According to a Reddit user, diaper cream is a magic cure for cystic acne.

Last week, Allure spotted a post by a Redditor named Infinitesimallyok, deep in the Skincare Addiction subreddit. "Diaper Cream is my HG for cystic acne!!!!!!" the user titled the post. HG stands for Holy Grail, and is commonly used as slang in the makeup community, according to Urban Dictionary. Cystic acne is when cysts form underneath the skin, causing painful red or white bumps on the skin's surface, according to Healthline.

"I had a brand new box of diaper cream in the back of my skincare cabinet (I think I bought it for a rash or something a couple months ago) and randomly thought 'hey, why don't I throw this on my cystic acne pimples,'" the post begins. "I was at my wits end, none of my spot treatments were doing anything to these gigantic monsters and I figured 'how much worse can I make it.'"

So, Infinitesimallyok went for it, and she slathered her face with extra-strength Zincofax. According to Zincofax's website, the extra-strength cream is made with 40% zinc oxide and 47% white petrolatum, along with a touch of fragrance (a chemical that adds scent), lanolin (wax derived from sheep), and mineral oil (made from petroleum).

She applied the cream before bed, and when she woke up in the morning, she was shocked. "This diaper cream had done what none of my acid-pink spot treatment-sulfur-clay mask spot treatments could do, and made all of my horrendous cystic pimples come to a head," she wrote. To further speed up the healing process, Infinitesimallyok covered her acne with a COSRX hydrocolloid patch the following night. "Boom, now they're flat," she added.

A slew of people commented on Infinitesimallyok's Reddit post, adding that various diaper creams have helped with their acne as well. Infinitesimallyok wrote that she has "no idea how or why this works" — but upon reading the diaper cream's ingredient list, I got a hunch that it had to do with the zinc oxide. Zinc oxide is often used medically to treat skin conditions including acne, diaper rash, aging skin, and wounds, according to WebMD. So, it makes sense that this particular diaper cream would be helpful.

Dermatologist and New York University professor Dr. Shari Marchbein spoke with Allure about using diaper cream to treat cystic acne. "Dermatologists use zinc, both orally and topically, for a number of inflammatory skin conditions, including acne, rosacea, and even warts," she told the magazine.

Another dermatologist, Dr. Shereene Idriss of Union Square Laser Dermatology, spoke with Teen Vogue about the topic. "Zinc oxide is an anti-inflammatory that helps protect the skin barrier," she explained. "If you're in a pinch, and desperate, it works well to help reduce inflammation for a cystic lesion. I wouldn't necessarily rub it all over your face if you're prone to acne break outs as it may clog your pores and make things worse overall." Marchbein agreed, and told Allure that while diaper cream can be used as a spot treatment for acne, using it all over the face can "potentially clog pores and make acne worse."

So while lathering up with a zinc-based diaper cream probably shouldn't become part of your daily routine, using it every now and then as a spot treatment should be safe. Also — and I hope this goes without saying — please do not use a diaper cream on your face that you've double-dipped your fingers into while changing your baby's diaper.

More Like This
Should You Be Giving Your Toddler Melatonin To Help Them Sleep?
All Your Questions About Getting Pregnant After A Tummy Tuck Answered
Here's The Best Time To Remove Your C-Section Tape
How A Recall Of Contaminated Formula Made The Formula Shortage Crisis So Much Worse