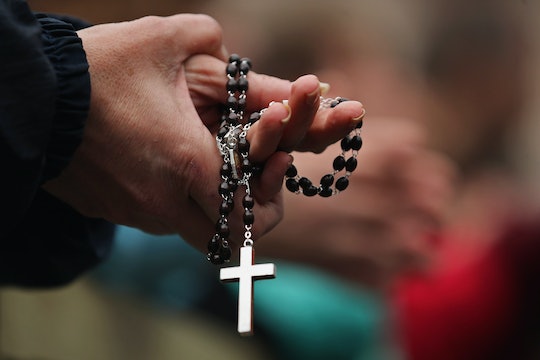 Did A Michigan Hospital's Abortion Ban Lead To Life-Threatening Miscarriages? The Allegations Are Terrifying

Most pregnant women expect to deliver healthy babies after a full-term pregnancy, but sometimes complications along the way keep that from happening. And if they do, most women would also expect that they’ll receive appropriate medical care from the doctors meant to save their lives. According to an exclusive story in the Guardian, a damning report by a former state employee centered around five miscarrying women at a Catholic hospital in Michigan has gone public, and it alleges that the Michigan hospital’s abortion ban led to dangerous and traumatic births.

Former Muskegon County health official, Faith Groesbeck, who blew the whistle on the alleged life-threatening situations, said in the report that “five women between August 2009 and December 2010 [were forced] to undergo dangerous miscarriages,” as a result of the hospital’s religious affiliation — and it’s associated anti-abortion policy. Mercy Health Partners did not immediately respond to Romper's request for comment.

The report claimed that all five women experienced preterm premature rupture of membranes — a pregnancy complication that impacts an estimated 150,000 women in the U.S. every year, according to the American Alliance For pProm Support — which put them at an increased risk of infection. None of the women mentioned in the report had reached the point of fetal viability in their pregnancies (around 24 weeks gestation in the United States, according to the Washington Post), and all allegedly showed signs that immediate medical intervention was required. But, according to the Guardian, the hospital’s church-directed policies prohibited doctors from providing that care, as it would mean that they were going against the anti-abortion directives written by the United States Conference of Catholic Bishops. Inducing a non-viable pregnancy would be considered hastening the death of a fetus, and as a hospital executive cited in Groesbeck’s report explained,:

...as long as there is a heartbeat, induction of labor is not an option in a Catholic institution unless the mother’s life is in jeopardy.

The difficulty in the cases of the five women named in the report is that not everyone has the same definition on what it means for a patient’s life to be in jeopardy. And when hospital policies clearly prohibit doctors from intervening in a way that could be considered contributing to an abortion, it can be a tough call to make. In the case of one of the women, the Guardian said the decision made was allegedly to only induce the delivery if the patient became septic (a severe infection that is often fatal), or if the fetal heartbeat stopped on its own. Ten hours after she was admitted, the report said, doctors finally induced once sepsis set in.

The other cases cited in the report were just as harrowing: two women allegedly suffered complications from a retained placenta, which resulted from their natural miscarriages, and needed surgery that arguably could have been avoided had they been induced. In both cases, the placentas were found to be infected. Another woman was allegedly sent home twice by the hospital despite showing signs of infection, and ultimately “miscarried by herself on the toilet.”

Regardless of anyone’s position on the morality of abortion or inducing during miscarriage, the real concern, said Groesbeck, is that none of the women named in the report were told of other options, such as being sent to another hospital, or even that immediate delivery by induction was safer. As a result, the report said, the patients were placed at risk for “life-threatening infection, infertility, and health problems, [and subjected] to unnecessary physical and psychological suffering."

Unfortunately, the report on the Michigan hospital isn’t the first time a Catholic hospital has come under fire for its care of miscarrying women due to its religious policies. The death of Savita Halappanavar in Ireland in 2012 has become a well-known example of how withholding this type of emergency care from pregnant women can have devastating consequences. According to the Telegraph, Halappanavar was 17 weeks pregnant when she began to miscarry. She died in the hospital from septicemia four days after her miscarriage began, after doctors denied her request to terminate the pregnancy because it was clearly not viable. Abortion is illegal in Ireland, and the country's laws are some of the strictest in Europe.

One of the Michigan women, Tamesha Means, filed a lawsuit against the United States Conference of Catholic Bishops in 2013 following her allegedly mishandled miscarriage, according to the New York Times. Means’ suit has since been dismissed by a federal judge, but the Guardian said that she and her lawyers intend to appeal the decision.