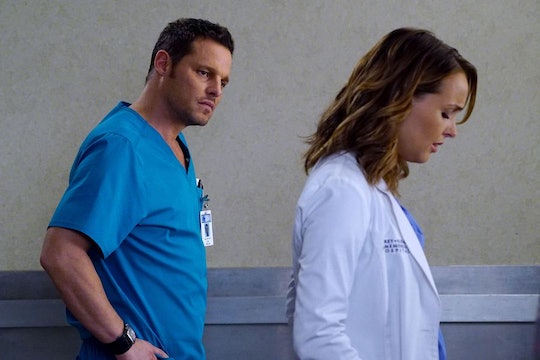 The midseason finale of Grey's Anatomy left fans asking one simple but very important question: Is Alex going to jail? Naturally, the midseason premiere took it's sweet time answering that question and even now, I'm not so sure what to think. Rather than jumping right to that storyline, the episode instead followed Arizona, Bailey, and Jo as they went to a prison hospital to treat a 16-year-old pregnant inmate. It wasn't until the three doctors were back in the car that Bailey shared what Alex had told her the night before. So did Alex really accept the plea bargain on Grey's Anatomy? Personally, I don't buy it.

At the end of the episode, Bailey told Arizona and Jo how Alex had come to her the night before to tell her he was going to the district attorney to accept the plea bargain and that he'd be going to prison for two years. Jo had to get out of the car because the news made her so sick and frankly, I felt the same. But then I thought about it and how does Bailey know for sure that Alex really did it? The three doctors left that same night to go to the prison and then when they got to the prison, they had to hand over their cell phones. Somehow I doubt the first thing they did when they left that tragic scene in the prison was to check their phones. And even if they did, maybe where they were didn't have any signal.

So if anyone did call or text to let them know that something happened with Alex's plea bargain/trial, they probably wouldn't have any idea about it yet. And a lot of different things could've happened. Alex could've listened to Meredith's advice and decided not to accept the deal after all. DeLuca could've dropped the charges, which a lot of fans seem to think he was trying to tell Jo he would do in the midseason finale. Or something else that only Shonda Rhimes could think up happened that has yet to be revealed.

Either way, I don't trust Bailey on this one. She's the same person that gave the doctors false hope that George really wasn't the John Doe that got hit by the bus. Sometimes, even despite all of her awesome abilities and traits, Bailey can be wrong and I think she's missing all of the facts on this one. Hopefully I'm proven right.