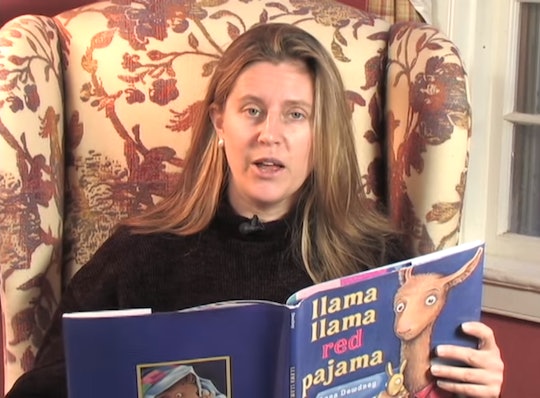 Did Anna Dewdney Have Kids? The ‘Llama Llama’ Writer Was Inspired By Her Daughters

Anna Dewdney, best-selling author and illustrator of the Llama Llama series of children's books, died at her home on Saturday, according to the Chicago Tribune. The 50-year-old author had battled brain cancer for 15 months. Dewdney, a longtime literacy crusader, requested that, in lieu of a funeral, people read to a child instead. Anna Dewdney had two kids of her own, who helped inspire her popular series.

In a 2011 interview with Parenting, Dewdney revealed that, when her daughters were young, she'd drive them through the Vermont countryside and mimic all the animals they passed, mooing at cows, clucking at chickens, and so forth. "But sometimes we passed a field with a llama, and I had no idea what a llama said, so I said, 'Ooooo... look! Llamallamallamallama! There's a llamallamallamallama!' And one day, 'Llama Llama' became 'Llama Llama... red pajama... reads a story with his mama." Llama Llama Red Pajama spawned nine sequels, such as Llama Llama and the Bully Goat, Llama Llama Holiday Drama, and Llama Llama Time to Share. All told, the series has sold more than 10 million copies combined. In 2011, the original was chosen for Jumpstart’s Read for the Record, an annual event that encourages millions across the nation to read simultaneously.

According to Publishers Weekly, Anna Dewdney worked as a waitress, a mail carrier, a daycare provider, and a teacher before she began illustrating children's books in the mid-1990s. In 2005, she published her first book. Amid the wild success of the Llama Llama series, she began making appearances at events to advocate for children's literacy. In 2013, she published an op-ed in The Wall Street Journal where she asserted that reading to children promotes empathy.

By reading with a child, we are teaching that child to be human. When we open a book, and share our voice and imagination with a child, that child learns to see the world through someone else’s eyes. I will go further and say that that child then learns to feel the world more deeply, becoming more aware of himself and others in a way that he simply cannot experience except in our laps, or in our classrooms, or in our reading circles.

Dewdney's girls are now grown. Like her mother before her, Berol Dewdney is an early childhood educator who currently teaches in Baltimore, Maryland. She graduated from Colby College. Her sister, Cordelia Dewdney, is a theater actress who attended Northwestern University. Anna is also survived by her partner, Reed Duncan, and her three dogs.