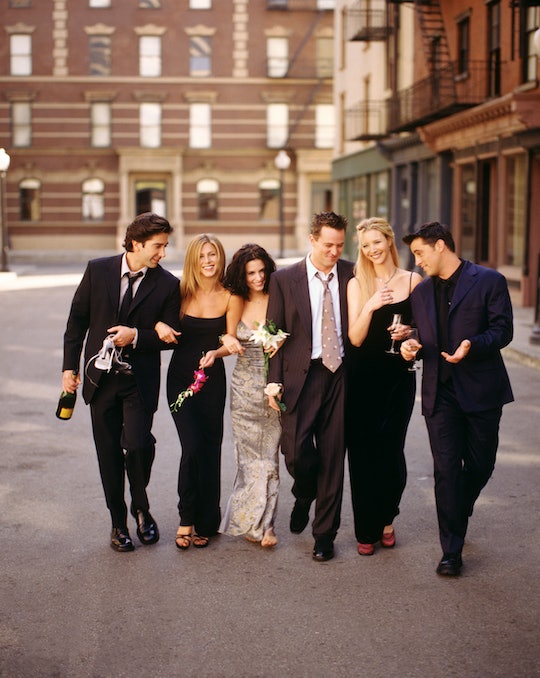 Did Any Of The 'Friends' Cast Members Ever Hook Up? There Have Been Plenty Of Rumors Over The Years

If you're anything like me, the moment you heard the words "Friends reunion," you immediately started picturing what a 2016 episode of Friends would look like. Well, I have good news and bad news for you, so let's get the bad news out of the way first. Unfortunately, the reunion isn't a new episode — rather, five of the Friends cast will be on stage to answer questions and honor director James Burrows (who is not, in fact, dead, as I thought when I first heard about the tribute, but has instead reached the milestone of directing over 1,000 episodes). But there's a bright side to the fact that this isn't an episode: NBC host Andy Cohen will be lobbing questions at the actors, which means we may just finally find out — did any of the Friends cast hook up?

There have been rumors, of course. You can't have six good-looking famous people work very closely together for an entire decade without having at least one drunken hookup happen, right? Right? Besides, over the ten years of episodes, their characters all hooked up with each other and each others' partners quite a bit. (Don't mind me, I'll be over here sketching out a map of the intricate on-show relationships.)

One of the biggest rumors to hit the public came after Matt LeBlanc's father, Paul, spoke to Star Magazine. He reportedly told the publication that Jennifer Aniston and Matt LeBlanc had hooked up while Friends was being filmed, around the same time that Aniston was dating Brad Pitt. However, Matt LeBlanc and his father apparently were not on the best of terms at the time of the interview, according to Hollywood Life, and Aniston's reps told Hollywood Life that there was no truth to the story.

That wasn't the only story to hit the rumor mill, either, of course. Just last week, even The International Business Times was wondering whether Courteney Cox was dating Matt LeBlanc. ET was also dispelling myths of a Courteney Cox and Matthew Perry relationship just after Cox ended her engagement with Snow Patrol musician Johnny McDaid. Lisa Kudrow largely managed to avoid any rumors of her dating or hooking up with costars, since she was married throughout most of the show's airing (and remains married to the same Michael Stern even today).

Hopefully, now that the show has been over for over a decade, the cast will be able to give the public a few juicy details. That is, if there are any — and a sneak peek at the NBC reunion hints at a strong possibility. Host Andy Cohen at one point in a preview asks the group, "Did you all sign contracts saying that you wouldn't sleep with each other?" After which Lisa Kudrow promptly turns to David Schwimmer and says, "David, say something!" It could be good-hearted fun, or it could be friends keeping secrets between friends (see what I did there?).