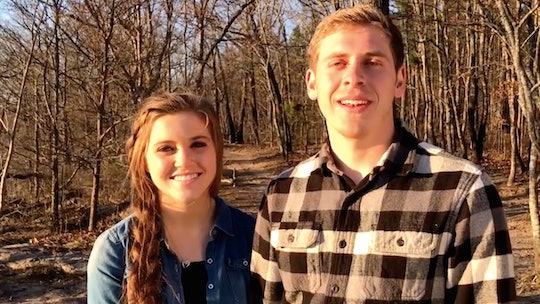 Joy-Anna Duggar, the famous family's youngest daughter is married and expecting a little one with her new husband Austin Forsyth. Considering their young age, a lot of questions about the couple's future have come to the surface since Duggar's pregnancy news broke. Many want to know what the couple's future holds, including educational goals and milestones. Joy-Anna is just 20 years old now, but did Austin Forsyth go to college? Little is known about the youngest Duggar's new husband, but here's what is.

Many of the Duggar women's beaus — such as Ben Seewald, Derick Dillard, and Jeremy Vuolo — have been introduced to the world since they got involved with their wives. Not as much is known about Forsyth, but in regards to his schooling, the 23-year-old had gone to flight school in Mississippi for some time, according to Entertainment Tonight. Although not much more is known about his educational background — such as which flight school he attended and whether he received a degree or certification there — he has reportedly held a job at his parents' Christian camp, the Fort Rock Family Camp in Arkansas.

While his resume isn't easily accessible online, more details of Forsyth's relationship with Duggar are. “We’ve known each other for a long time,” Duggar stated in the TLC video that announced their courtship. “Fifteen years,” in fact, meaning that they have known one another since Duggar was only 4 years old.

This long friendship has created a wealth of memories. When he first asked her to be his girlfriend, he took her to a place from their childhood. Forsyth shared as much in the same video, saying, "I picked this spot because the last time we were here together was August 1, 2015." Duggar added:

It was a whole group of us that came up and were just hanging out and it was really late at night. The stars were just gorgeous, so for me, that was really special.

Along with his relationship with the Duggar family, Forsyth also appears to have a close relationship with his own parents, Terry and Roxanne Forsyth. The family's camp in Combs, Arkansas offers horseback riding, the longest zip line in Arkansas, a firing range, archery, farm animals, and more, according to Us Weekly. The camp's website shows a staff photo including both Forsyth and Duggar, smiling proudly alongside the rest of the Forsyth family.

On the camp Facebook page, Forsyth's parents announced the budding relationship between Forsyth and Duggar, saying:

We are extremely happy to announce the courtship of our son, Austin! He and Joy have honored the Lord and will be a great testimony for his goodness and provision for a spouse! Congratulations to Austin & Joy!

Appearing on Counting On and his parents' camp website aren't Austin's only exposure to the public eye, according to the International Business Times. In 2009, when he was just 15, he appeared with his family on CMT's reality TV series, World's Strictest Parents, which brings troubled teens to the homes of strict families in order to help them get their lives together. The episode featuring Austin and the rest of the Forsyths exposed the world to his family's beliefs.

Despite his reality TV roles, Forsyth has maintained a pretty low profile on social media. Sharing an Instagram page with his wife, he pops up from time to time in sweet shots of the two enjoying married life.

As Forsyth and Duggar continue to grow their family, it is likely that more information will be revealed about the dad-to-be's background and the couple's plans for the future. Until then, they seem to be keeping many details somewhat under wraps.