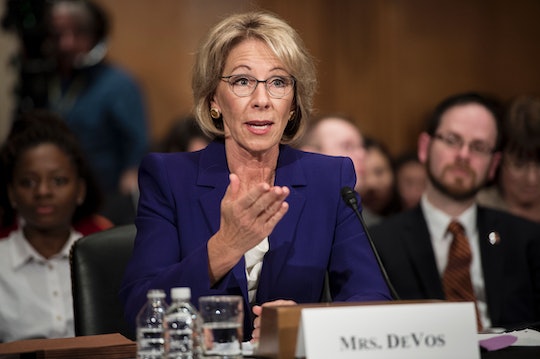 President Trump's pick for Secretary of Education has been a controversial one since the day it was announced, but now Democrats are calling for another hearing before the role is confirmed. Betsy DeVos has been widely criticized for her suspected conflicts of interest, but her lack of experience in education. Did Betsy DeVos' kids go to public school? No, and neither did she.

DeVos, a philanthropist and activist, does not have a degree in education. She attended a private high school, Holland Christian School, in Michigan before getting a bachelor's in business from Calvin College, also in Michigan. She has also never worked in a school, though much of her philanthropic efforts have been directed toward school systems that she personally supports. Largely, her support has been in private and charter schools, and as an education activist, she has largely prioritized the interests of these schools over public schools. She's long been an advocate of school choice, which often takes money from public schools and gives it to for-profit, private schools.

DeVos' has four children with her husband, Dick, all of whom attended private schools. The DeVos family is worth billions, most of which comes from sizable inheritances from both her family and her husband's. While they have primarily focused their efforts on private schools, The Detroit News did report last fall that she and her husband had donated "millions of dollars" to Michigan's public schools over the years.

One of Trump's proposed programs that DeVos is expected to back would include allocating $20 billion in federal funding that would allow parents to choose whether to send their children to public or private schools. A program might work in theory, but some states don't allow government funds to go to private schools that are religiously affiliated (like the ones DeVos attended as a kid). Furthermore, many are critical of this proposed plan simply because there's no clear indicator as to where those billions would come from.

Private and charter schools are free from government standards that have come to define public school education in the U.S., and without those restraints many of these schools have flourished. But not all private schools have succeeded, and their failure leaves youth unprepared for their futures — all at the thousands of dollars out-of-pocket expense of their families.

Aside from the fact that DeVos doesn't seem interested in public school education — how the majority of American children are educated — her overall lack of not just educational, but political, experience has critics worried. There are some 98,000 public schools in the U.S. that rely on the funds DeVos would control if she is confirmed, and the fate of 50 million students would be in her hands. Hands that many have said are questionably capable at best.

If she's confirmed, DeVos would be the first Secretary of Education in history to have no classroom experience and to have neither been a public school student herself, or sent her children to public schools. In a piece republished by The Washington Post, Stephen Henderson, an editor at a newspaper in Michigan who has covered DeVos for many years, put it thusly:

DeVos isn’t an educator, or an education leader. She’s not an expert in pedagogy or curriculum or school governance. In fact, she has no relevant credentials or experience for a job setting standards and guiding dollars for the nation’s public schools. She is, in essence, a lobbyist — someone who has used her extraordinary wealth to influence the conversation about education reform, and to bend that conversation to her ideological convictions despite the dearth of evidence supporting them.

Henderson, and other Americans who have expressed concerns about her credentials, seem to have the support of Senate Democrats, who have called for an additional confirmation hearing for DeVos. After her first hearing, during which she implied that schools should have guns in case of bear attacks, DeVos got plenty of ire — particularly from Sen. Chris Murphy of Connecticut who posed the question. She also subsequently became the butt of many internet and late-night jokes.

But educators in the U.S. aren't laughing: if confirmed, they fear that DeVos could completely upend the public school education system, which has already been struggling financially for decades.