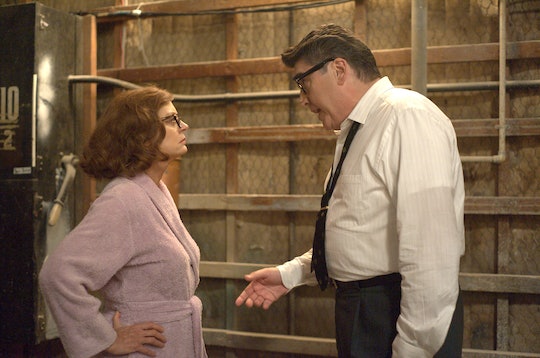 In the second episode of Feud: Bette and Joan, the show began to delve more deeply into the relationships between stars Bette Davis, Joan Crawford and Bob Aldrich, the director of What Ever Happened to Baby Jane?. Aldrich was walking a tightrope trying to keep both his headstrong leading ladies happy as well as satisfying the studio, who wanted to make sure the fire between Davis and Crawford didn't fizzle out. To do that, Aldrich had to keep the women at each other's throats while at the same time making sure they both trusted him, ensuring that filming would stay on schedule. In "The Other Woman," his efforts resulted in him getting much closer to Davis, and even sharing a kiss with her. But did Bette Davis and Bob Aldrich really hook up?

In real life, there's no evidence that anything at all happened between Davis and Aldrich. Even in the episode, it's difficult to tell how far things went; they could have merely shared a kiss during an emotional moment. Their connection appeared to be genuine, with Davis able to count on Aldrich when she needed comfort and advice, but the situation was a complicated one. Aldrich was her director, he was married, and anything between them would certainly spark jealousy from Crawford.

When it comes to the real Davis and Aldrich, by all accounts their relationship was a professional one. After the success of What Ever Happened to Baby Jane?, they went on to work together again in Hush... Hush, Sweet Charlotte and there doesn't seem to be much evidence that they ever had a romantic relationship. However, if the rumor did get started, it seems to be because of Joan Crawford.

In Bette and Joan: The Divine Feud, a book about their relationship by Shaun Considine, he reports Crawford calling Aldrich late one night during the filming of Sweet Charlotte (a film Crawford was initially set to star in, but ultimately dropped out of) to discuss her performance. While on the phone, Crawford heard Davis' voice in the background. “I knew immediately who it was,” Crawford said. “It was Miss Davis. She was there, in Mr. Aldrich’s bed.”

Davis’ daughter B.D. Hyman, however, disputes this. “I wouldn’t put it past Mother to let Joan Crawford believe that she was having an affair with Bob Aldrich,” she said, adding:

But I don’t think there was ever a physical relationship between them. Certainly Mother was always adoring of her directors when they got along, and hated them when they didn’t. She would always concoct these fantasies that this director or that was madly in love with her. But I think the last thing in this universe that Bob Aldrich would even consider was a relationship with either Mother or Crawford, and certainly not with Mother.

It doesn't seem like there was anything going on between Aldrich and Davis in real life, but the implication that there was elucidates something important about Davis and Crawford. It shows how low they went when they sniped at each other, and how both women pushed back at one another in such deeply personal ways.