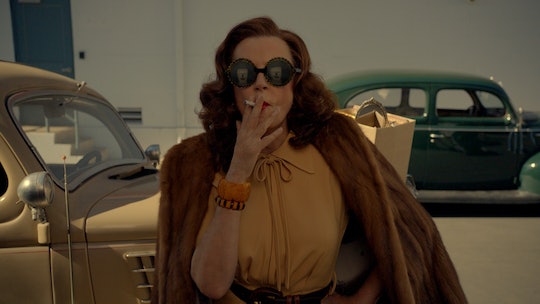 Early on in Feud's premiere episode, What Ever Happened to Baby Jane? director Robert Aldrich was on the hunt for a studio to work with so that he could make the film a reality. After being turned down by multiple major studios, he found his way into the office of Jack Warner, head of Warner Brothers. Though they did end up working together, Warner needed some convincing; he wasn't a fan of either of the film's stars because he found Bette Davis and Joan Crawford difficult to work with. Davis especially was a problem for Warner because she had sued the studio in the 1930s over her contract, and in doing so started the avalanche that brought down the entire studio system. But did Bette Davis really sue Warner Brothers like Feud suggests? (Upon reaching out, Warner Brothers declined to comment to Romper on the matter.)

Regardless, it was true that Davis sued Warner Brothers, though she wasn't solely responsible for the collapse of the studio system. Under the classic Hollywood studio system, the biggest studios of the time (referred to as the Big Five: Fox, MGM, Paramount, RKO, and Warner Brothers) handled both production and distribution, giving them a great deal of control. They also locked their stars into lengthy contracts. That meant that a star working with or being loaned out to another studio could be a difficult process, and many actors ended up forced to make films that they didn't want to make simply because their contracts allowed for so little freedom. Studios could also use these contracts to punish stars for behavior they didn't appreciate.

Davis was desperate for better roles that she wasn't getting at Warner Brothers and she wanted to be able to leave the studio so that she could do more fulfilling work, so in 1937 she sued Warner Brothers to be let out of her contract. And Feud was right about another thing: Davis didn't win. However, she still got the result she wanted. While causing such a fuss could have easily left her blacklisted, instead Davis was actually rewarded with better scripts and more interesting parts.

And while she didn't singlehandedly destroy the system Hollywood was built upon, she did start something. Years after Davis' lawsuit, actress Olivia de Havilland also sued Warner Brothers over her contract. The studio had repeatedly suspended her as punishment and then extended her contract to make up for the lost time, essentially refusing to let her go. De Havilland took them to court and actually won her lawsuit; it resulted in a law that didn't allow contracts to exceed seven years, which is informally called the De Havilland Law. That was another big step in the eventual dismantling of the studio system.

Davis may not have been solely responsible for the end of the studio system, but her refusal to compromise did allow other actors to do the same. Once again, Davis set the trend.