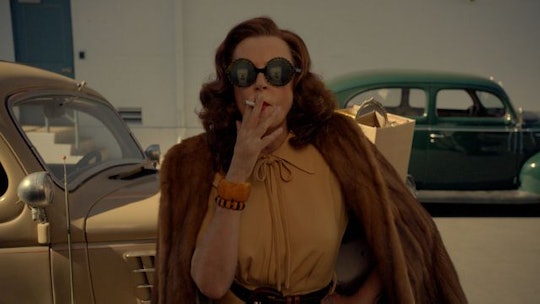 It's also known for being a good flick, but What Ever Happened to Baby Jane? is mostly famous because it was the tipping point in Bette Davis and Joan Crawford's infamous feud. It was the first (and only) movie the two rivals starred in together, so come award season it was a very big deal that Davis was nominated for her performance in the film while Crawford was not. But did Bette Davis win an Oscar for What Ever Happened to Baby Jane? Sadly, she did not, though the details leading up to the loss is much more interesting than simply losing out to another actress.

When Crawford found out that she wasn't nominated, she set out with her friend, fellow actress and gossip columnist Hedda Hopper, to convince the Academy that Davis shouldn't win. Then she tapped two other actresses to pinky swear that if they won, they would let her accept the award on their behalf so that she would go down in history with an Oscar in her hand — even if it wasn't hers. It was super crafty. Susan Sarandon, who plays Davis on the FX show Feud, told People that Davis never got over that moment. And who could blame her? It was a nasty move on Crawford's part.

Although Davis had won two Oscars in the past, one for Jezebel and one for Dangerous in the '30s, winning an Oscar (and even being nominated) for her performance in the 1962 film was a big deal. As most of us know, Hollywood is a tough business for women when they get older and the roles were starting to slow down for both Davis and Crawford. Things were so bad, in fact, that Davis cheekily put an ad in the newspaper asking for a job. Yes, Bette Davis put out a classified ad for work. According to Variety, she wrote:

Mother of three, 10, 11, & 15. Divorceé American. Thirty years experience as an actress in motion pictures. Mobile and more affable than rumor would have it. Wants steady employment in Hollywood (has had Broadway). Reference upon request.

The film was a huge hit, despite the fact that she didn't win the Oscar and she went on to work throughout the rest of the 1960s and '70s in film and on television. In the end, she sort of beat out Crawford. After Baby Jane (and her crafty Oscars move), Crawford was mainly on television and one of her film credits, Journey to Midnight, is actually a deleted scene. Davis surely relished in that fact.

Hollywood's a tough place for women and both Crawford and Davis were super talented. It's a shame that they were so terrible to each other, even when they were being celebrated at the Oscars.