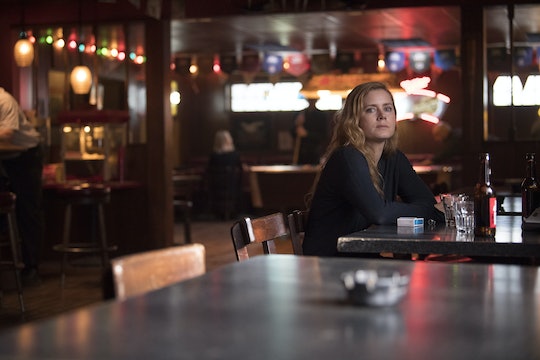 Several suspects are starting to emerge on Sharp Objects as Camille and the Wind Gap police launch separate investigations into the murders of Ann Nash and Natalie Keene. Though police chief Vickery favors an out-of-towner as the perpetrator, Detective Dick is more inclined to look at people closer to home. That means family members could be responsible, especially Ann's dad Bob or Natalie's brother John. But did Bob Nash kill the girls on Sharp Objects?

Warning: spoilers ahead for the Sharp Objects novel!

Richard certainly seems to be looking into the idea. Camille caught him taking a sample of dirt from Bob's tires, perhaps to match to the scene of Ann's murder. But Richard wouldn't own up to it, nor would he say who his prime suspect was. Bob might be in the running, but there doesn't seem to be much evidence that he did it outside of his particular closeness to Ann. That could be enough to make him suspicious, though. In "Fix," he remarks on Ann's intelligence (a normal thing for a father to say) but then notes that he could talk to her in a way he couldn't talk to his wife. That's definitely odd, but not necessarily grounds for murder. Bob Nash may be a possibility for the Wind Gap police, but there isn't a lot to support that theory.

First of all, Bob Nash would need a motive. If he was so fond of Ann, then why would he kill her? There seems to be some implication on the show that they might have been too close, in the same way that John and Natalie's sibling bond is regarded with raised eyebrows. If Bob Nash was abusing Ann then that could explain things escalating to the point of violence, but there's absolutely no evidence of that, either. Wind Gap gossip isn't enough proof.

CNN reported that filicide (the murder of a child by a parent) occurred in the United States around 500 times a year. Analysis of the FBI's Supplementary Homicide Reports data done by the Alpert Medical School of Brown University stated that fathers were slightly more likely to commit the crime (54.7% of dads were responsible) but the numbers were pretty much split between parents. Real life examples make it easy to see why Bob would be on the detective's list. But even if he had a reason to kill Ann, there's no explanation for why he would kill Natalie too.

Sharp Objects is based on a novel of the same name by Gillian Flynn, so the answer to the central mystery is readily available for curious viewers. The show is keeping things mysterious in the early episodes, but the groundwork is being laid for the ultimate reveal. If you're not interested in spoilers, then you can cut and run right now, but if you are, then look no further.

Basically, no, Bob did not kill the girls on Sharp Objects, but someone else did. All I'll say is that when it comes to solving the Wind Gap murders, it's better to look at the less typical suspects.