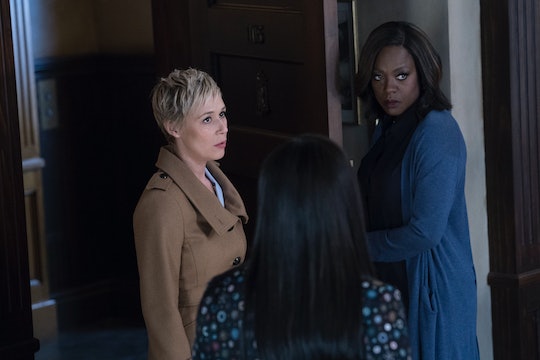 Though Bonnie has been a main character on How to Get Away with Murder since the beginning, much of her background has been left unexplored. Now that some of her family secrets have been unearthed, viewers have begun to speculate that there are even more to uncover. Like, did Bonnie's sister kidnap her baby? This HTGAWM theory has fans wondering if Bonnie's sister might be integral to all the mysteries of Season 5.

So far there are two mysteries that are driving the fifth season. One concerns the child Bonnie gave birth to when she was just a teenager. Her father told her the baby was stillborn, but records discovered by Nate indicated that the baby lived and was even abducted from the hospital as a newborn. Then there's the unknown victim slowly expiring in each of the flash forwards. During Connor and Oliver's upcoming wedding, someone lays bleeding in the snow with Laurel's son sitting not far off. Bonnie arrives in time to rescue Christopher and smother the person in the snow. Who took Bonnie's baby? And who is the victim in the flash forwards?

These two questions could have one answer: Bonnie's sister, who has been mentioned before but never made an appearance on the show.

This could easily get very convoluted, but stick with me for a moment. While viewers have been playing process of elimination to figure out which existing character could be the flash forward victim, Reddit user Edith31 thought that it could be someone the audience has never met before. That makes their identity all the more difficult to predict, and HTGAWM does love to keep its audience guessing. As the Redditor wrote:

I've this strange theory in my head that tells me that the person in the snow could be Bonnie's sister. We heard about her once when Bonnie went at her father's funeral home. But she actually wasn't there... and we know there is someone casted as Julie Winterbottom in the next episodes.

Perhaps Bonnie's sister was the one who kidnapped her son from the hospital decades ago and is now trying to kidnap Christopher for some currently unclear reason. Redditor Kilian7 had a similar thought while analyzing the blurry surveillance video of the woman who took Bonnie's son. The long brown hair certainly look like flashback Bonnie, but there's a good chance her sister bears enough of a resemblance to her for them to be mistaken in one pixelated photo.

The theory is predicated on a lot of unreliable information, unfortunately. There hasn't been any official casting announcements for a Julie Winterbottom, nor is the character listed on IMDB for the upcoming episodes. A fan account on Twitter announced that Elizabeth Morton had been cast as Julie, which is also listed on the TV Guide page for the show. But it doesn't look like the network or the show's social media accounts have confirmed that information.

This theory also raises a lot of questions. Julie wouldn't be able to conceal the baby from her family for this long unless she gave him to someone else after abducting him. She also has no obvious connection to Christopher that would link her to him in the flash forwards. It's early enough in the season that these blanks could be filled in as the story unfolds, but right now there's very little proof.

One thing is certain, however: Season 5 seems to be leading towards some kind of revelation about Bonnie, and the increased focus on her history is sure to come into play before the season ends.