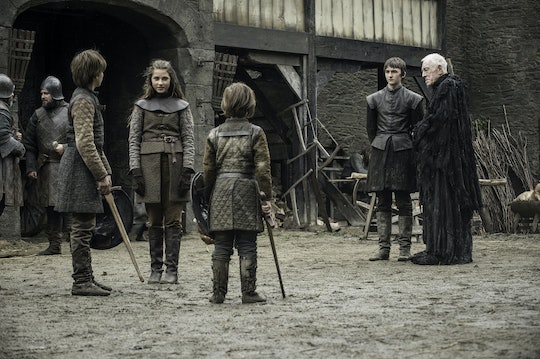 Did Bran Warg Into Hodor On ‘Game Of Thrones’? It Had Serious Repercussions

All hell broke loose on the end of Game of Thrones' "The Door" as the Night's King and the White Walkers came after Bran where he was holed up with the Three Eyed Raven. It resulted in total chaos, and more than a few casualties. The most lasting consequence was Bran's effect on Hodor. Did Bran warg into Hodor on Game of Thrones?

During all the craziness, Meera was trying desperately to hold off the Walkers with the help of the Children of the Forest. The problem was that she couldn't get Bran out of their little tree sanctuary without Hodor to carry him, and Hodor wasn't exactly handling the fighting well. She called out to Bran to wake up and to warg into Hodor so that he get Hodor to carry him to safety. This is where it gets tricky, because Bran heard her while he was still in the past – and the vision he was in featured young Hodor, a.k.a. Wyllis.

Bran did warg into Hodor – or, rather, Wyllis. He warged into Hodor from the past, and this ended up affecting Wyllis in the past too. It's what made Hodor into Hodor in the first place. Confused yet?

Bran has been warned all season long about his visions and the potential consequences of doing too much within them. Bran's effect on Hodor is perhaps the most shocking outcome yet of Bran's actions while in a vision. Young Ned Stark almost seemed to hear Bran, then the Night King saw him, and finally Hodor was left forever changed thanks to Bran's intervention with the past. It's particularly painful because Bran has only ever known Hodor as Hodor, and he never knew that it was all his doing.

Bran warging into Hodor is what saved his and Meera's life while they were being chased after, but it was at an incredible cost. Not only did Bran's actions essentially rob Wyllis of the life he might have had, but they also robbed Hodor of the life he currently has as he was killed protecting Bran once again. It's something Bran will definitely have to grapple with going forward.

The way the timelines overlap is still a little confusing any way you slice it, but the explanation for Hodor's Hodoring is not one that's likely to be forgotten any time soon. It changes everything going forward and going back; I imagine it'll be pretty hard to rewatch those early seasons without hearing Hodor and remembering why that's all he says.