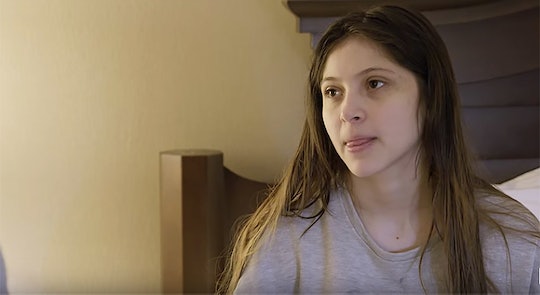 Teen Mom Young and Pregnant star Brianna Jaramillo recently relocated from Wisconsin to Oregon with her infant son, Braeson. The move was somewhat short notice, leading a few fans to wonder if Brianna and her boyfriend, Robert, broke up to due to the change.

Anyone who watches TMYP knows that Brianna's relationship history is a bit complicated. After conceiving Braeson following a hook-up (she currently has no contact with the paternal father), she got back together with her on-and-off love, Danae Young. But after some contentious fights, the two called it quits shortly after the birth of Braeson in August 2017.

"It was just a lot. I was taking a lot of my anger out on Brianna," Denae admitted about the couple's relationship during a reunion episode, according to Radar Online. "I have made some mistakes. I wasn’t the perfect person. I did treat you terribly and I do apologize for that."

Luckily for Brianna, she found love with Robert sometime in March 2018. The best part? Robert was particularly fond of Braeson, often posting photos of him to Instagram.

"I love braeson so much 💘💘💯," Robert captioned a photo from August.

But somewhere along the line, things took a turn for the couple after they moved to Oregon together with Braeson and Brianna's mom. Perhaps it was too soon in the duo's union to relocate together, or maybe Brianna was too overwhelmed with parenting in a new place to focus on their relationship. Either way, it looks like these two are done.

Take Robert's Instagram post on Oct. 30, for instance. The Wisconsin native captioned a picture of a young family with a crying face and broken heart emoji. "💔😢🙏 #oneday," he wrote.

Just FYI, that wasn't the only sad post Robert shared. He has posted a bunch of heartbroken memes with crying face emojis for the past month or so. I'm not a private investigator, but I'd wager this guy is going through a breakup at the moment.

The good news? Robert is also focusing on work as he recovers from the loss. Talk about a healthy distraction.

"Finally got my toolbox 😍🙏& i got a few tools too but im not going to stop building up the chain of being a diesel mechanic!!! 💸💯🔧👌," he captioned a shot of his new toolbox.

Yeah, I think Robert will be just fine.

As for Brianna? She's focusing on her son for the time being.

"Happy Thanksgiving 🍁 thankful for everything I have and everyone in my life but mostly thankful for my handsome baby boy," she wrote on Instagram. "Will post family pics later today 💖 hope everyone has an amazing thanksgiving!!!!"

I'm sure viewers will find out what really happened between Brianna and Robert on upcoming episodes of TMYP. Until then, fans should respect the exes' privacy.