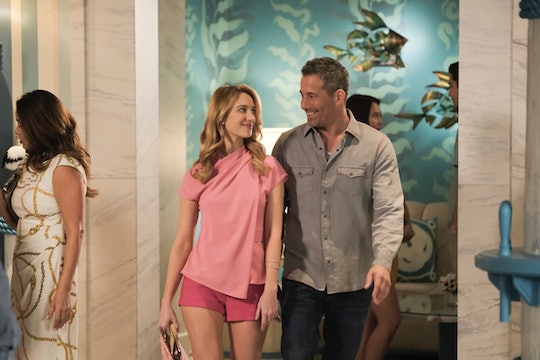 Chuck May Have A Dark Side On 'Jane The Virgin'

It seems like each week there's a new suspect in Scott's murder case, however it looks like the real killer may have finally been revealed. Well, maybe. So did Chuck kill Scott on Jane the Virgin or is he just another red herring? At the end of "Chapter Sixty," Anezka was arrested as the prime suspect in Scott's murder case. A video had surfaced of her yelling at Scott, saying that she'd kill him. Of course, he then died later that same night, which doesn't bode well for her. However, in Monday night's episode it was revealed that whole fight was actually a plot by Petra to break-up her sister's marriage.

It turned out Petra had done an elaborate scheme to make Anezka think Scott had cheated and then she pretended to be Anezka and it was actually her who had that fight with Scott. Anezka, was actually in a drug induced sleep at the hands of her sister, at the time that Scott was killed, which means she's totally innocent. Once Petra told Rafael the truth, he had his P.I. do some investigative worked and discovered there were some words in Scott's burn book that had been erased. Apparently the night Scott was killed he was going to meet someone nicknamed "JP" to "shake him down." JP is apparently the real suspect the cops have been looking for.

Though Petra and Rafael had no clue who JP was, Anezka certainly did. At the end of the episode, the police paid Anezka a visit in jail and asked the question most fans had kind of forgotten about only to be totally shocked by Anezka's answer.

Apparently, JP stood for "Jerky Pants," which is what Anezka and Scott called Chuck, because of course Scott used code names for people in his burn book. Unfortunately for the police, Chuck was on his way out of town with Petra... and a gun. It looks like Petra may have found herself in another relationship with a killer. Hopefully, she's able to make it out of this alive.

Thankfully, Rafael, who finally admitted he's in love with her, is aware of Petra's whereabouts. Being the good mom she is, Petra let Rafael know where she and Chuck were going and asked Rafael to take care of the twins for two nights. Once Rafael finds out that Chuck is now suspect No. 1 in Scott's murder case, you better believe he'll do everything he can to make sure Petra's safe. Hopefully Rafael will get to her in time.