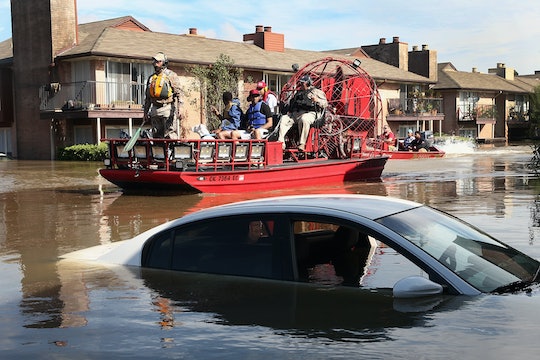 Although Hurricane Harvey is still affecting Texas and parts of Louisiana, scientists are already trying to figure out what made the storm so powerful in the first place. Just like researchers have asked in the past after disastrous weather, many want to know if climate change made Hurricane Harvey worse or not. It’s a good question, especially given the fact that Harvey hovered for days, causing much more damage than a moving storm would have. Still, scientists aren’t sure they’ll ever be able to properly answer the question. But they are working hard to see what the odds are.

Often after huge storms like Sandy and Katrina, the media goes on a frenzy asking whether climate change caused the bad weather. But that’s not what scientists should be asking, since there were hurricanes and huge tropical storms centuries ago, too — way before humans were taking a toll on the environment. The best way to get some answers about predicting storms is to instead run experiments and study models that might get to the bottom of the effect of climate change, if any, on storms like Harvey.

Luckily, there's already data to work with. For example, various studies have shown that warmer temperatures might make storms less frequent, but more intense. Gary Lackmann, an atmospheric science professor at North Carolina State University, is dedicated to discovering what that means, according to The Atlantic. To do so, he decided to study Hurricane Sandy after it hit in 2012. Instead of examining if climate change was the cause of the storm, Lackman instead approached his research with two slightly different questions.

The first was whether climate change had an effect on the intensity of a storm, and the second is whether cooler temperatures would’ve changed the storm patterns. To do that, he made models by plugging in the same weather conditions for the storm and simulated what Sandy would have done in 1880, 2012, and 2100.

“The difference between the 1800s version and the present-day Sandy was not that significant,” Lackmann said in a 2015 paper. But the 2100 version is very different from the 2012 assault on New York and New Jersey and ends up traveling much farther north.

So, using the warming projections from the Intergovernmental Panel on Climate Change, a storm in the same weather conditions in 2100 would be vastly different than the one that would have occurred in 1880, or the one that the East Coast suffered in 2012. Climate change won’t cause storms in the future, but it will change how those storms act and the intensity of them.

The same would theoretically be true for storms like Harvey, and varying temperatures could potentially be the cause of it just stalling over a part of the country for days on end. Scientists at this very minute are likely running loops of the storm and trying to see why it behaved the way it did. The short answer is that they just don’t know if climate change made Harvey worse or not just yet.

But just because it’s hard to say if the storms stalled because of climate change that doesn’t mean researchers or government officials and agencies should ignore it. According to Lackmann’s research, storms do take different paths depending on temperatures — and that means, cities and towns need to prepare for future storms.

Cities in flood plains, for example, are should take action now to fortify the infrastructure needed to mitigate the effects of flooding. If Lackmann’s Sandy models are any indication, areas that aren’t used to dealing with hurricanes and major storms might want to come to terms with the fact that weather systems change over time.

While there are no definitive answers about exactly what climate change does to hurricanes, the evidence so far indicates that there's more where the devastation from Harvey came from.

More Like This
Meghan Markle Spent Her Thanksgiving Volunteering For A Cause Close To Her Heart
Over 10,000 Sippy Cups & Bottles For Toddlers Recalled Due To Lead Poisoning Hazard
14 Baby Names Inspired By 'The White Lotus' That Deserve A Round Of Aperol Spritzes
Kim Kardashian Says She's "Shaken" By Balenciaga's Ad Campaign Featuring Children