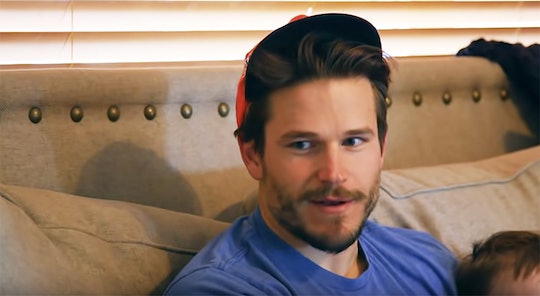 Teen Mom 2 star Cole DeBoer is an amazing father figure to Chelsea Houska's daughter, 9-year-old Aubree. From father-daughter dances to supporting the little girl through every milestone, the dad is always there. But if you're wondering whether Cole will adopt Aubree to cement his role in her life, the answer is a complicated one.

Adam Lind, Aubree's biological dad, has never been a big part of her life. The ex-reality star once referred to Aubree as a "mistake" shortly after she was born, and he has never set up a consistent visitation schedule for their relationship to blossom.

Due to Adam's legal troubles throughout the years, he's now required to see Aubree at a supervised visitation center. But true to form, Adam bailed on both scheduled visits and he supposedly hasn't seen Aubree in months.

As for Adam's younger daughter, Paislee, he gave up legal rights to her in September 2018, according to People.

“Yesterday I got a phone call from Taylor and she said that her and Adam had court and he gave up rights to their daughter, Paislee,” Chelsea explained in a recent episode of Teen Mom 2.

The mom-of-three also noted that Taylor's husband adopted Paislee after Adam gave away his rights.

In light if Paislee's situation, it's reasonable to wonder if Cole will take a similar route with Aubree. Although Cole said he'd take on the role in a heartbeat, Aubree isn't ready to accept the change.

“She was confused, she wanted to know if Paislee was still her sister,” Chelsea said about an off-camera talk she had with Aubree about the situation, according to People. “It kind of made her sad. I said, ‘Is that something you’d ever want?’ She said, ‘Yes.’ And then she’s like, ‘Wait, would that mean that my dad is not my dad anymore?’ I was like, ‘Yeah, he wouldn’t really be your dad like that anymore.’ And she said, ‘Well then I don’t think I want to [do it].”

Of course, Chelsea and Cole don't want to pressure Aubree into something she wouldn't feel comfortable with.

“She would resent us, which is why I don’t want to do it right now," Cole explained in a preview clip for Monday night's episode.

Even if Cole never adopts Aubree, their bond will remain tight. Want some proof? Look no further than this sweet anecdote Cole shared about Aubree in February 2019. He said:

Father Daughter Dance success!!!! I am very proud of who this sweet girl is becoming the older she gets! I swear she is already an adult. In the truck on the way to the dance I told her, 'you know that I love you and that I will always protect you and always be here for you whenever you need me!' She said, trust me I know that.

The adoption situation may be complicated and fluid, but Cole's support of Aubree is stable and consistent. Whatever is meant to be will happen in time.