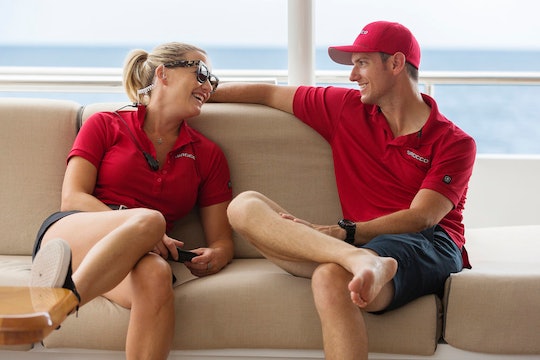 Colin Continues To Win Hearts On 'Below Deck Med'

The crew of Below Deck Mediterranean has been shuffled around quite a lot in Season 4. When Chef Mila exited the show, stew Anastasia Surmava entered the kitchen, with June Foster arriving to pick up the slack. But now that another chef was joining the crew and Anastasia was returning to her former position, June was going to be let go — until Colin Macy-O'Toole stepped in to give his spot to her. Wait, what? Did Colin quit Below Deck Med?

It definitely looked like that was about to happen in "Don't Cry for Me, Sirocco." June was visibly heartbroken about losing out on the job, which prompted Colin to do a little soul-searching. He decided that if space was the issue, he would sacrifice himself so that June could stay. No one else was on board with the idea, but Colin had a chat with Captain Sandy about it in the early minutes of "It's Ben A Long Time," anyway. He told her that June had a passion for yachting that he didn't share, so he was willing to let her take over his deckhand position. He felt she deserved it more because of her enthusiasm for the work. But, thankfully for everyone on the Sirocco, Colin did not succeed in convincing Cap'n Sandy.

Sandy praised Colin for his attempt at self-sacrifice, telling him how amazing he was at length. But because he was so incredible, he was too much of an asset to her to be let go. She needed him, and if he left, it would be a disaster for everyone. She practically begged him outright to remain on the yacht. And, finally, with tears in his eyes, Colin agreed. Nearly everyone else in the remaining crew appeared to be equally overwhelmed by Colin putting himself on the line. They went on about what a fantastic human being he was, how sweet and selfless; June was overwhelmed by the gesture but made it clear she'd never let him leave in her stead. It was very nice and everything, but guys: this wasn't a Tale of Two Cities scenario. He didn't offer to go to the guillotine instead of her.

Colin was more casual about the entire situation during a chat with Decider. "It just made sense," he said, because he wasn't looking to make yachting his forever career. He has a background in music and had worked on Fire Island ferries, so he "joined last season just to try something new." There were also only three charters left at that point, so he wouldn't have been missing out on much if he left. "I just thought that was the best situation because June was the youngest on the boat, she was relatively new to the industry, so if I could just go home and chill with my friends and family, she could stay on and pursue her career," Colin said.

His motives were pretty practical at the end of the day. But Colin fans needn't despair, because he didn't end up going anywhere. And June is doing well too, having moved on to a new opportunity on a research trip, per Bravo. Colin's moment of sacrifice may have caused a kerfuffle, but all was well in the end.