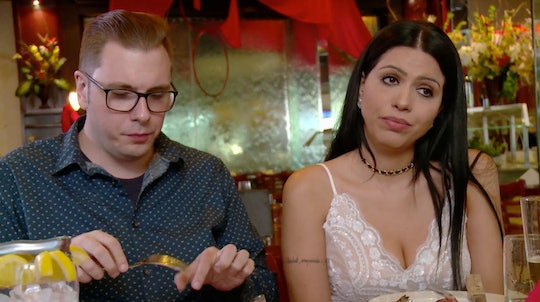 Clues That Colt & Larissa From '90 Day Fiance' Are Already Married

On this season of 90 Day Fiancé, Colt and Larissa's relationship has been full of ups and downs — on and off camera. Larissa has expressed uncertainty about marrying Colt or leaving the United States. There's been a ton of drama surrounding their wedding planning and she even got in trouble with the law after a fight with Colt. So now that things are getting down to the wire, fans are wondering: Did Colt and Larissa from 90 Day Fiancé ever get married?

Per the rules of the K-1 visa, foreign members of couples on 90 Day Fiancé have to decide within 90 days if they want to get married or return home. Based on the fact that Larissa was apparently still living in Colt's hometown of Las Vegas as recently as this month, as well as a few mentions of words like "husband" and "wife" in police reports (more on that in a moment) it would seem that Larissa and Colt have tied the knot.

The best place to look for clues on 90 Day Fiancé couples is usually Instagram. But unfortunately, as Newsweek reported, Larissa archived all of her Instagram posts in mid-November, and then restored a few photos of herself sans-Colt. Then a few days later, Larissa added some worrisome text to her Instagram story. "HE TURNED OFF HIDE MY PHONE," Larissa wrote on her Instagram, E! News reported. "HELP ME HE WANTS TO CALL THE POLICE HELP ME."

Officers were "dispatched to a family disturbance" at Colt and Larissa's Las Vegas house this month, according to an official report obtained by People. The exact details of the alleged incident have not been released, but according to the police, Larissa "had committed Battery Domestic Violence on her husband." A police report is not the most ideal way to announce to the world that you've gotten married, but, well, based on the use of the word husband, it sounds like Larissa and Colt have tied the knot.

Colt, whose Instagram page is still public, posted to his story about the alleged incident, further confirming that he and Larissa are married. “The police interviewed us but not long after they decided to arrest Larissa,” Colt wrote on Instagram, according to a 90 Day Fiancé fan account. “No one was hurt and I did not press charges against my wife. However it is policy in the state of Nevada that since we are in a domestic partnership, someone had to be arrested.” Again, this is not the way most people dream of announcing they got married, but at least now fans know that Colt and Larissa worked through all the wedding-planning drama.

And speaking of wedding-planning drama, this past week's episode, "Flirting with Disaster" showed Colt and Larissa clashing as they planned for their wedding. Between Colt telling Larissa he was only "97 percent" sure he wanted to get married, complimenting a venue employee's glasses, and shutting down Larissa's pitch to get married at a Brazilian steakhouse, the episode truly was flirting with disaster.

That said, Colt has posted several photos of himself and Larissa since the alleged incident, so it looks like everything is OK between them. It will certainly be interesting to continue watching their wedding unfold on 90 Day Fiancé.